Wonder – The book review by Oliver 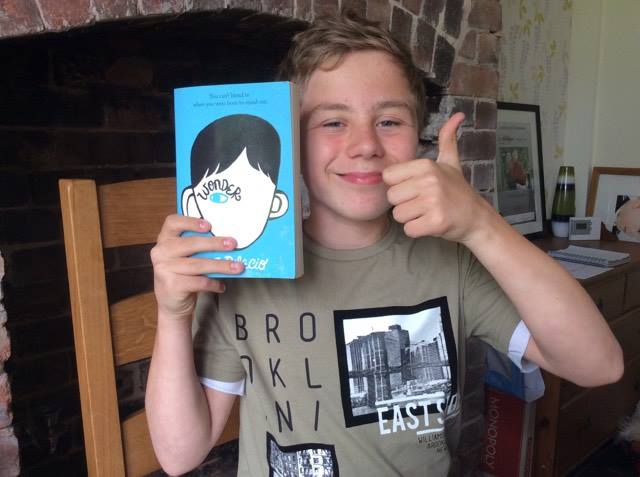 I recently read Wonder by R.J.Palacio for the second time and loved it. Read here, how and why it really touched me.

I decided that I wanted my son Oliver to read it too and so together, we read Wonder and fell in love with Auggie and his gang in a life that isn’t totally dissimilar to our own. This is what Oliver thought of the best-selling novel, Wonder.

What is Wonder about?

It’s about a boy called August who has a facial disfigurement, his sister and his family. He went from being home schooled to going to a ‘real school’ for the first time. He makes a lot of friends including his best friend Jack who helps him through a lot of things but you’ll get deeper into that when you read the story! It’s also about him trying to fit in at school, his family and all of their struggles and all the things that he has to deal with. There are lots of different views from different characters to you get it from other peoples view and I like that

Which character did you most relate to in Wonder and why?

I most related to Via because she’s the protective older sibling. I know I’m not a girl (as you can see) but I can relate to her because people have bullied August and looked at him differently. She has always been there for him and I feel that kind of bond with my brother. Her parents always focus on August and I have felt a bit like that, not so much now but in the past, I have.

Who is your favourite character?

Oooo this might be a random choice but – Mr Tushman. He helps August through all his transitions, he gets him some new friends and he helps and cares about August. He encourages and includes him which is a brilliant thing to do.

What is your favourite part of the story?

My favourite part would be where Amos beats up the bully Eddie who is picking on August when they all go into the forest so jack can (whispers) * have a pee* . Eddie was launching fire crackers and being horrible about August’s face and Amos stepped up and made sure that August was alright. It was very cool!

Who should read Wonder?

Everyone should read Wonder. I wouldn’t recommend it for really young children as they might not understand what it meant; Augusts face and what he went through. But 8 years and up would be fine and any adult would like it. As long as they’re looking for a good book – and it is a great book -then it’s the one for them!

What do you think is the message behind Wonder?

I think *reading from the cover* “you can’t blend in when you were meant to stand out” and I think it means that maybe looking like this isn’t a curse but blessing because you are different which can be good. Everything can be good with the right vibes!

What would you score Wonder out of ten?

Definitely a 10. It grabs your heart strings and makes you think. You feel like you’re having a conversation with every character. I really recommend you read it!

Reading Wonder with my boy was lovely. It gave us some quality time together every night with a

Wonder got us quite emotional at the end

meaning to chill with him but something always comes up!! Is that just me?!). It also provoked some really deep conversations and made Oliver think about the similarities and differences between his life and Auggies. I’m a big fan of self-reflection as long as something positive comes from it! We laughed and we cried at the journey of August and his gang and I can only reiterate what Oliver has said. If you’ve not read Wonder, you need to. You might like our book too ? *shameless plug*