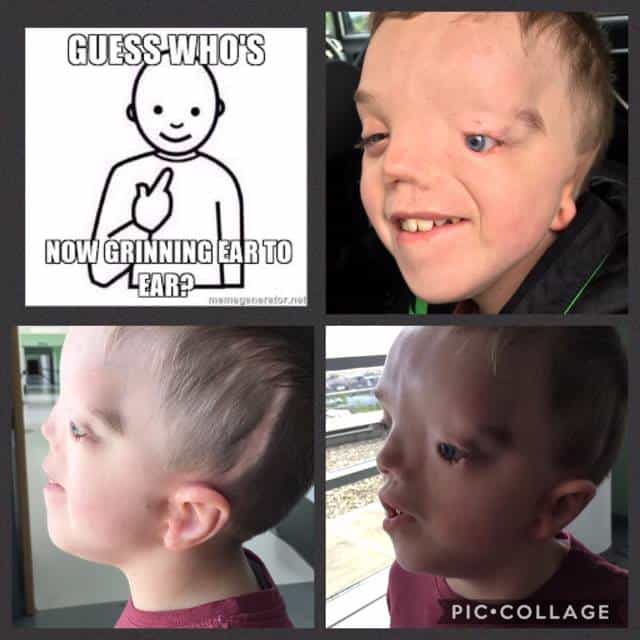 When people see Harry, without doubt the first thing they notice is his missing eye. Rarely do people notice that he only has one nostril. I don’t think anyone has ever commented on the fact that he’s only got one ear.  His Dad and I were in no rush to have another ear created for him as to be honest, it caused him no problems physically or socially. And let’s face it, boys have selective hearing at the best of times so he was no different to Oliver in that respect. However, the fact that his vision was deteriorating slightly in his only eye changed everything. He had THE cutest glasses to wear but of course, only one ear (ledge) to rest the arm of the glasses on. The other kept comically slipping down the side of his face and he was not impressed. A sports band helped for a while but it wasn’t ideal and so I asked the cranio team who look after him at Alder Hey if we could look at the possibility of a new ear.

There are two options for creating a new ear. One way is to remove cartilage from the ribs and fashion an ear using your own body tissue, covered in skin grafts taken from elsewhere on your body. Not a quick procedure and from all accounts a pretty painful one. Option two is to have a prosthetic ear made which would stick on to the side of the head at first and in time, be attached by magnets. There are pros and cons to both (I won’t bore you with them here but feel free to get in touch if you do want to know more) but in the end, we opted for a prosthetic ear. After only six weeks and four appointments, Harry has now been fitted with his new ear! It looks amazing. The remnants of an ear lobe that Harry does have (microtia) has been left for now so the prosthetics department had a bit of a challenge creating an ear to fit around it but we are super impressed with the final results. Now that his glasses have two ledges, Harrys vision and life will only improve even more!

My heart was banging as I showed Harry his reflection for the first time but he seemed unaffected by the new two eared Harry looking back at him. Probably because we were visiting Argos afterwards and he was keen to get going so that he could spend his Dads money!

Now, it’s about adjusting to a new routine of daily fitting, removing and cleaning his ear. There will be trials and errors no doubt but as with everything else, we will find our way. As I write this, his ear is next to me on the table like a serial killers’ trophy. I wonder how long it will be until someone utters the words “Oh bugger! We’ve lost it” or worse still, the dog decides it will make a lovely chew toy and I have to call the hospital to request a replacement. You just know it’s going to happen but don’t worry, I’ll be sure to share it with you.