The adventures of a prosthetic eye 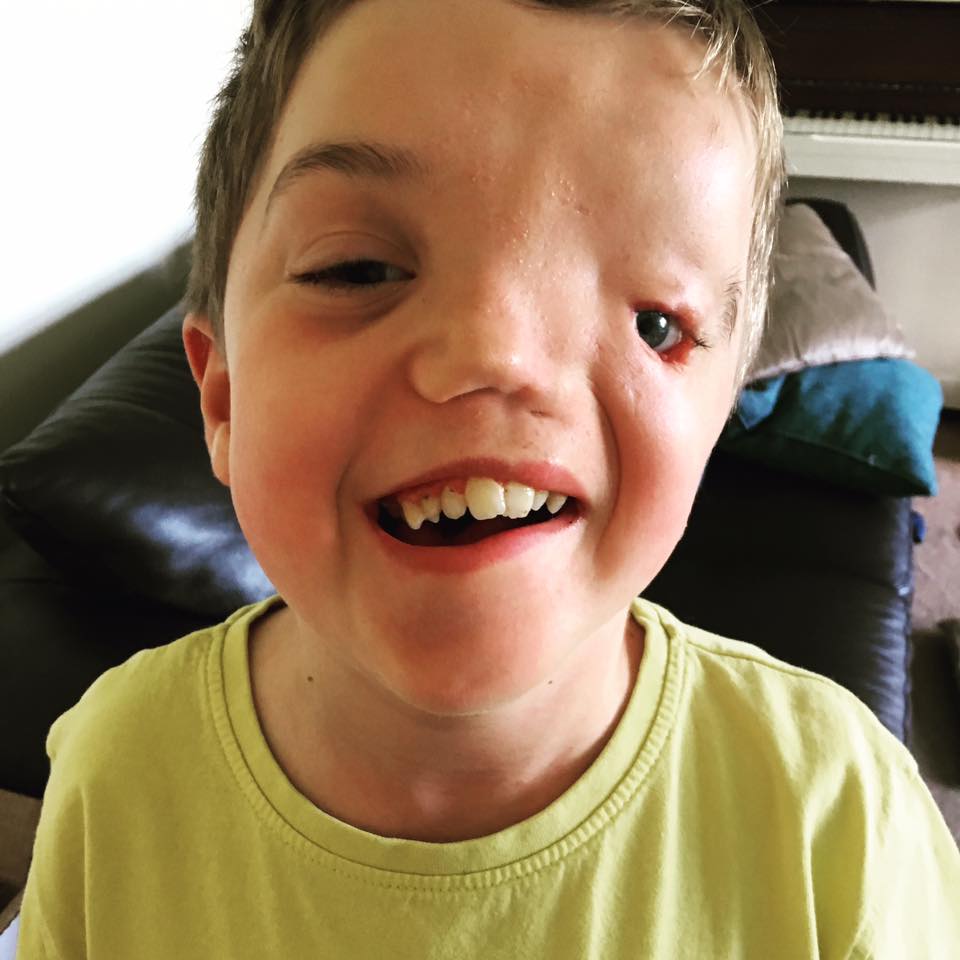 When Harry was born without his left eye I was devastated. Professionals assured me that medical science was making advances all the time and would create something that looked incredible. But I didn’t want to hear it. I didn’t want medical intervention. I wanted the two eyes that mother nature owed my boy and anything else was a poor imitation. I was angry and lost.

Over the years I came to terms with the reality that we would be spending many years trying to give Harry what he had been born without. He has had many operations to create a socket and skin grafts from the inside of his mouth to create a ‘wet socket’ lining. For a while, Harry had a pea green mould in his eye socket (long story!) but eventually the day came to collect his prosthetic eye. I expected a round ball – think ping pong ball with some sharpie art work – to pop into his socket but it’s actually shaped more like a guitar plectrum. Its wider by his nose and tapers to the corner. The detail is incredible.

Fitting the eye felt so weird at first. Let’s face it, sliding some glass into a hole in your child’s face is never going to feel natural. But in no time at all, we were used to popping it in, taking it out and Harry was tolerating the process.

Over the past 3 years since the eye arrived there has been more than one occasion where it’s been the source of amusement and entertainment. For your viewing pleasure, here are a few.

A call from school

I was at the butchers a few years ago when Harrys school called. They told me that his eye was edging its way out and wondered what the best thing to do was. I explained that if they pressed on the inside of his eye near the nose then his eye would pop right out. This was a pretty standard conversation for me but from the look on the woman’s face who was serving me, it’s not one she heard often. Her mouth dropped open and her eyes were wide until I explained, between laughing, that Harry had a false eye. I wasn’t laughing when I got home and realised she’d been so distracted that she’d not packed half of my order!

It wasn’t uncommon for Harry to come home with his eye in a pot. One day he came back with his socket open and after checking his school bag and realising that the eye wasn’t there I began to worry. I asked his Dad if he had sent him to school with the eye in, which he had. I asked the after-school club if they had seen it, which they hadn’t. Hmmmm. I text the chaperone on his mini bus but she said she couldn’t remember seeing him with it in. After a status on Facebook laughing about the fact that we were an eye down, a parent of one of Harrys mini bus companions said she remembered seeing it on the floor of the bus. Sure enough, the next day, the chaperone retrieved the eye from the floor at the back of the bus and it was sterilised and returned. My son officially has a wandering eye!

More recently, Harry’s high school called me concerned that his ear was coming off! (that’s another story. Click here to learn more about my very own Mr potato heads prosthetic ear!). As if that didn’t sound hilarious enough, she told me how the week before, while the class had been swimming, one of the pupils noticed that Harry’s eye had fallen out. Cut to the class being evacuated and the net which is usually reserved for floaters being used to hunt and capture the eye. Never a dull moment!

Excuse me waiter…there’s an eye in my pizza. clink. Yep, his eye had fallen out and was now sitting on his plate next to his food. He was absolutely oblivious to the fact that his eye was missing but loved the raised energy levels in the room as we laughed and I took a quick photograph to capture the moment.

And not forgetting the numerous occasions where I have got the boys ready for their day at school or a day out, bundled them into the car and then realised 5 minutes into our journey that his eye was still sitting in boiled water in an egg cup / shot glass / beaker in the kitchen! In the next few weeks we will be visiting Harrys consultants to discuss the next steps with his surgery and eye. He’s had a slight growth spurt which means that his eye is falling out more often. In the world of prosthetic body parts, a few millimetres can make a huge difference so there is more change ahead. But I don’t fear or resent medical science anymore. I am grateful for the incredible talents and techniques that are helping my boy live his life.

I think I’ll keep the original eye as a memento of our journey so far. Not many mums can say “I’m keeping an eye on you!” and mean it literally but this mum can!

The future doesn’t scare me anymore, in fact eye can’t wait! Do you see what I did there? I’ll get my coat!