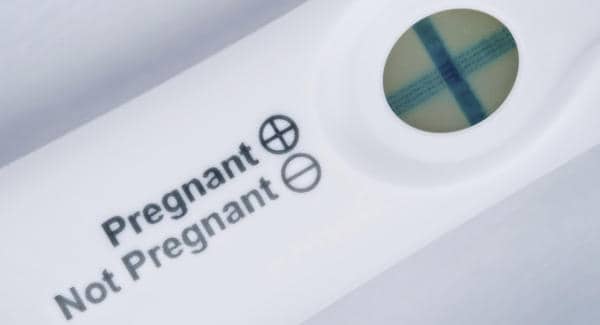 Mark and I had decided that we wanted to create a little person of our own but I’d been on the pill for over ten years so we expected it might take a bit of trying. I came off the pill and with two years until our wedding we said we would relax and let nature take its course. If I fell pregnant in the next few months then great, if not then we would wait until after the wedding. We were super chilled. Apparently, that’s a great state to be in to conceive as six weeks later I was knocked up! The moment I told him

I had felt ‘odd’ for a few days and decided to take a pregnancy test just to rule it out. I peed on the magic stick of life changing possibility and waited. Slowly, one line appeared to let me know that I had indeed peed correctly. Then, a horizontal line appeared across it. Baby! I took a deep breath and felt an elation rise from my very toes through my body. I dried the pregnancy test and slipped it into a super fancy box that is usually used for displaying pens or other long thin objects. Im guessing the designers didn’t ever envisage a pregnancy test in there but what can I say, I’m a maverick. I wrapped a sliver bow around the red box and packed it into our suitcase before our trip to New York in two days for Marks 30th Birthday.

There, over a beautiful steak, I wished him a happy birthday and presented him with his gift. Fatherhood. He was overjoyed and we toasted the success of our swimmers and egg!!

Just kidding. That’s how I planned it. In reality, I peed on the stick, saw the cross appear and screamed “MAAAAAARK!” from the bathroom. He came dashing upstairs and I thrust the pregnancy test (pee end) into his hand and stared at him like something demented. We screamed together followed by hugging and bouncing around. We had a baby on the way! Little did we know then, the surprises that awaited us…