Sharing my 9 lessons from Kenya 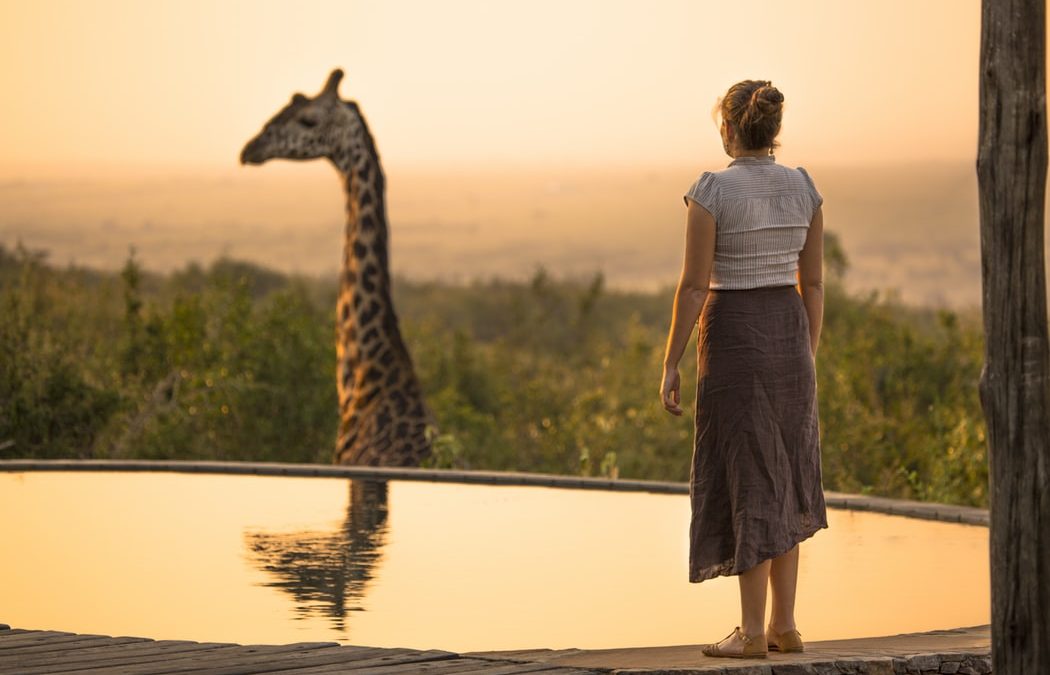 Recently, I was privileged to be invited out to Kenya as part of the press team with Sense International to see the work that they are doing in and around Nairobi with children who are deaf blind.

I had few expectations before I went as I really had no idea what work like this would entail but, as the mother of a child with both significant hearing and vision impairment, I did anticipate finding it all quite emotional.

What I learnt over the four days I was in Kenya will stay with me always and may not come as much of a surprise to many of you.

That a mothers love is universal.

We met Bravin who was born completely blind. His Father left the family shortly after Bravin was born, unable to cope with the stigma surrounding disability. Communities in Kenya can see disabilities as a curse or a slight on the family and so Naomi his Mother was left to cope alone. The love just poured out of her as she told us about her son’s journey, her own battle with isolation and depression and the incredible support that Sense International have given to them both. She was attentive and clearly in love with her little man. 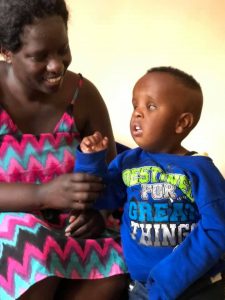 When the limbs of Linnet’s daughter Charity started to stiffen, she took her from church to church asking for prayers and exorcisms of whatever was possessing her daughter. Although the churches were happy to accept her money (she spent her life savings) nothing helped. When another parent recommended therapy from Sense, Linnet found her answers and the support she and her daughter needed. 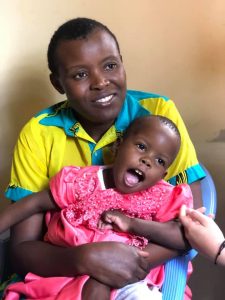 Although I expected nothing less from a Mother it was wonderful to see that the bond between a Mother and her child (which I believe is a very unique and precious one) is an incredible force in any part of the world.

That service to your cause keeps you going in times of struggle.

One of the Occupational Therapists, Elly,  who had been trained and employed by Sense International to run the screening and support programmes in Kenya told us that he had already screened three babies by the time we arrived at the health centre early on the second day. You might think that this is to be expected but the funding for this work has now disappeared and Elly works with some of the families he has become a part of over the last three years on a voluntary basis. The babies he screened on that morning had been brought for miles on foot by their parents wanting the best for their children. I wondered how hard it was for Elly to continue to work for no pay when he had bills of his own. He replied ” I took a vow to serve the people and that is what I will do” That statement really touched me and made me realise the power of having a purpose in life bigger than yourself. 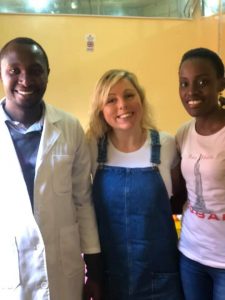 Similarly, the deaf blind school that we visited was run by staff who were clearly passionate about the futures of their students and dedicated to ensuring they lived to their full potential. They saw their mission as more than education. For them, it is about helping students to thrive and not just survive and to support the parents so that they could continue the work they were doing at school. It warmed my heart to realise that my own sons staff would have said exactly the same. Wanting the best for the children in your care is an incredible quality and not restricted to post code.

That support makes all the difference.

When Naomi found herself as a single parent and many of the friends she had also disappeared, she sunk into a depression fuelled by loneliness and an overwhelming responsibility to the child she now had. She was truly alone. Elly (the Occupational Therapist) put her in touch with other parents and groups in Kenya. She said that “they showed me that life can still be good” You would never know from her beaming smile now that she had felt so lost but I completely understood and was glad she was a hugger as I came away and she wrapped her arms around me. Being able to talk, having others to relate to and a safe place to be vulnerable and learn from others is essential to everyones mental health, not just parents of SEND children!

That we are so fortunate to have the National Health Service.

Naomi told us that the cost of Bravin’s therapy was 1000 Kenyan shilling per visit. He needed three sessions a week and so to travel there and feed them both it was costing her approximately 5000 shilling per week (approx £37) . This is a huge amount for a parent who is unable to work.

We met Sospeter who is deaf and shows signs of Autism. His parents were still together and his Father was supportive (unusual in Kenya) but even working all the hours he did, they still couldn’t have afforded the hearing aid that Sospeter desperately needed. Sense International had paid for it as part of the project and Sospeter was due to be fitted with it the week after our visit. 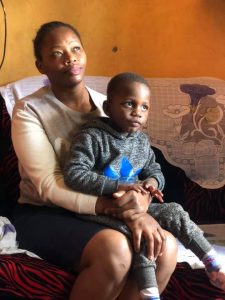 When I think about the operations and procedures that Harry has had (over 20 since 2006), the various therapies, assessments, interventions, medications and equipment, it makes me so very grateful for the services, expertise and support of the NHS in the UK.

That gifts cause more issues than they solve.

Visiting the families and seeing how very little they live with, it’s completely natural to feel like you want to help. Just £20 is the equivalent of approx 2680 shilling and can make a huge difference. But only for a little while. Steaming in as a ‘generous Westerner” only serves as a temporary fix, doesn’t help the families to help themselves and make a sustainable change, creates a culture of dependency and puts visitors at risk of being valued only for what they can give rather than what they can learn and how they can practically help. I will be sending some small gifts and resources out for the families and the school but it will be delivered by Sense International, given by the organisation and not as a direct ‘quick fix’ from me. I think this is one of the biggest lessons that I have taken away.

That I worry over trivial stuff.

Visiting somewhere where the focus is on finding food, keeping a roof over your head and literally doing everything you can to ensure that your child’s even most basic of needs are met really put my own issues into perspective. The things I worry about, in the big picture of life, are incidental. I know that it’s all relative, that a problem is a problem if you feel that way but really? If my bills are paid and my children are fed does it really matter that I cant always treat myself at the end of the month or that I have to not have my nails done to save a bit of money each month. Is that a genuine reason to feel fed up? Nope. I just hope that this is a lesson that stays with me as its easy to fall back into old habits. I am printing some photographs off of the wonderful children I met to put up in my office as a reminder.

That hope is one of the strongest emotions we have.

The staff at Sense International as well as the families they support are massively hopeful that another project can be funded to continue the support systems they have worked so hard to develop. It’s the reason we were there at all – to see what the projects offer and support them next year as they begin to fund raise again. Their optimism is contagious and I see that the hope they have keeps them moving, albeit without funding, forwards one day at a time.

As in any other country, the hope the parents have for the support and development of their children was tangible. They clearly wanted to best and hoped that the therapies, strategies, aids and support would give their children the life they deserve. I don’t know any other parent who doesn’t feel the same although many take for granted the support that’s available. Hope for a better tomorrow kept the parents going in the same way that I have relied on it in the past.

That your nightmare day can be someone else’s dream.

It’s just that simple. A day that we struggle with, feel defeated by and leave us with more questions that answers can still be a great day compared to many others and a day that people will gladly swap their lives for. It sounds cheesy but its true that there is always someone worse off than yourself.

That giraffes have massive tongues. 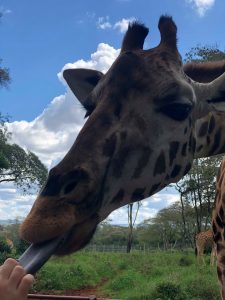 But I guess more than anything (technically my 10th lesson I guess), I didnt leave Kenya feeling anything close to pity for the families I met. I was touched by their devotion for their children, inspired by their strength and humbled by the chance to meet them and have a glimpse into their lives.

I will however, feel incredibly sad if the support they have received and rely on will come to an end. Before my visit, Sense International was just a logo and the idea of families struggling in Kenya was not part of my reality. Now, I see the logo and visualise the team who work so hard with a common vision of making life better for others. 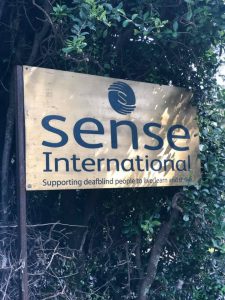 If you enjoyed this blog, you may also like to read ‘Dear NHS Staff‘ and ‘Why we will never be a ‘normal’ family‘