The Pain and Power of Social Media 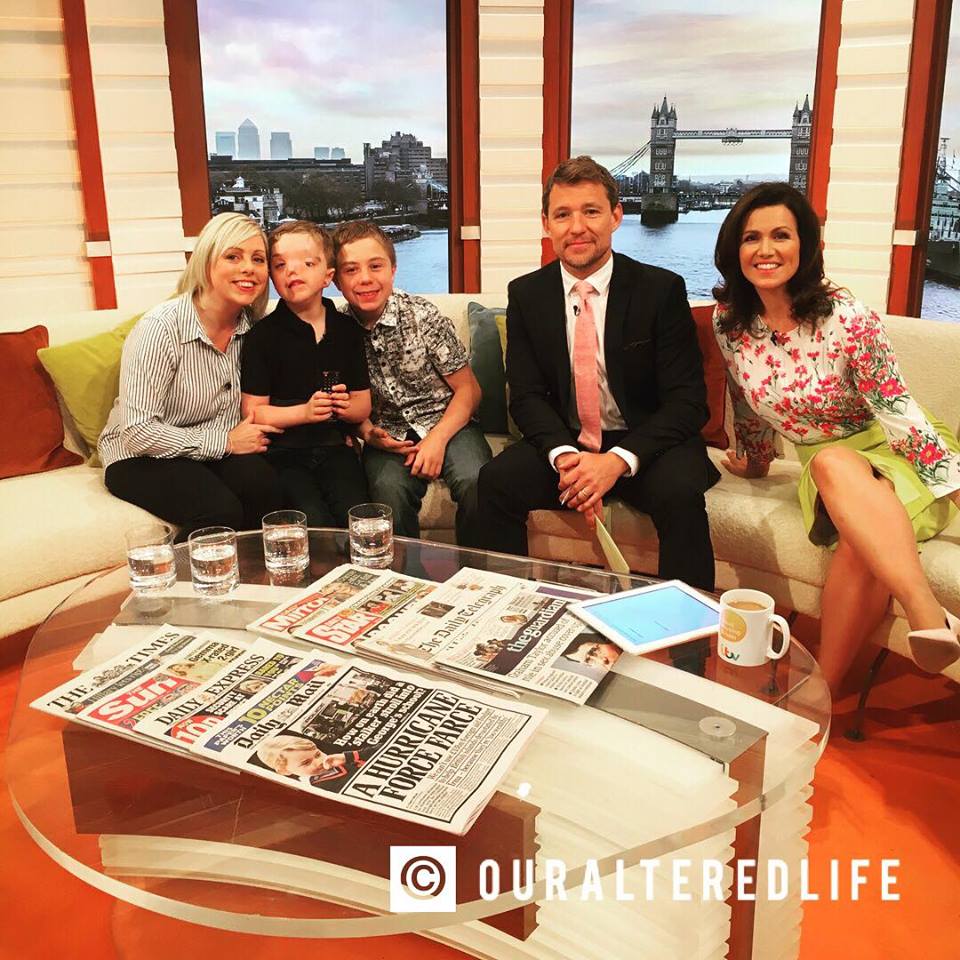 Statista.com reports that so far in 2017 there are 2.46 billion social media users worldwide. That’s a LOT of content! Some of it is funny, heart-warming, heart breaking, terrifying, harrowing, inspirational, educational, informative, antagonistic …the list goes on. It is clear that we now live in a society where we feel the need to share our news and opinions online rather than calling a friend as we used to do years ago (wow that makes me sound old!)

In 2008, I started writing the story of my journey with my boys in the hope that it might help other mums who felt as lost as I was when I was plunged unexpectedly into the world of special needs. My twin boys were born in 2005 and we were given the news of Harrys craniofacial condition called Goldenhar syndrome when he was born.

Early in 2017 with the end of the book in sight, I set up Our Altered Life accounts on three major social media platforms (Facebook, Instagram and twitter) in an effort to raise awareness about Harry’s condition socially too. I wanted to reach other families like us and to show everyone how life with disability can be inspiring and amusing as well as sharing the typical challenges that people usually associate with disability.

But sharing your life on social media can come at a price.

The pain of social media

I have written before about dealing with the trolls who feel that it’s acceptable to insult me and my son, to hurl the most awful abuse from behind their keyboards and try to provoke me into reacting. I have no time for their games and no respect for them as people. And while I have also been told that these individuals are simply exercising their right to have an opinion I also have the right to be disgusted by it. Free speech is one thing, targeted abuse is something totally different. Sometimes, the images that families share of their special needs children to celebrate their differences and show their magical personalities are used by other individuals without permission. They can be recycled onto other sites in a bid to drive ‘traffic’ their way or they can be turned into ‘memes’ with the children as the butt of the joke. This is totally horrific for families to experience and social media has a very long way to go in terms of removing images that are defaced and circulated without consent. Where the original source of these insults can be identified I do believe that penalties should be imposed.

Having images reported as offensive

Every social media platform gives the option to report an image or video which viewers consider to be inappropriate, threatening or offensive. For example, there are thousands of videos of animal abuse, terrorist acts and domestic abuse which circulate our social media freely despite an incredibly high number of complaints. In other cases, one or two people can report an image of a mother kissing her child and this will be removed.

This was exactly the case for me recently someone reported an image of me kissing Harry on Instagram. He didn’t have his prosthetic eye in at the time and rather than merely ignoring or scrolling past the image they reported the image. Instagram upheld their complaint and removed the image (which had been liked over 2300 times by our fantastic IG community) saying that it didn’t meet their ‘community guidelines’. They had done it previously in August and at that time I had followed their complaint procedures and requested an explanation as to why it had been removed. I heard nothing and so this time I took my rage to twitter. I asked for some retweets of support but I never expected the public outcry that followed.

To date the image has had 119,000 retweets, 71,400 likes and 4518 comments of support. We have appeared on television for local and national news channels including breakfast TV and our battle has been shared globally in countries such as Germany, Spain, Australia, Japan and Holland.

I know that people have questioned where sharing our life ends and exploiting my son begins so I thought I would include it in today’s blog.

First and foremost, I am very proud of both my boys and am happy to share their strengths and differences. We no longer live in the dark ages where those with disability were institutionalised or forgotten, kept out of public view for fear of bringing shame and embarrassment to the family. If I was to deliberately keep Harry away from social media, how would this help him? What message would I be sending to my own son about how I feel towards him?

I am incredibly proud of Harry’s eye socket that I chose to show on Instagram. It has taken two operations where Harrys skull has been taken apart and several other procedures to take skin from the inside of his mouth to line the socket. All of this to create something that everyone simply takes for granted. Medical science at its best. Yes, some people may say it’s disgusting. I say its magnificent.

In sharing our journey and Harrys face, I hope to desensitise our audience to his differences so that he can be viewed and judged on the person he is and not just the face he has. If people have a problem with me doing that then that’s their issue and not mine and while I know I won’t ever change or educate every opinion, I will never stop trying. It’s true that we have some cruel comments but it’s a more beautiful fact that for every one hideous comment we receive there are a hundred wonderful, positive and supportive messages to drown it out. Life isn’t about what happens to us, it’s about how we deal with it all and so those comments are the ones I choose to focus on.

The power of social media

Which brings me to the power and beauty of social media.

I’m not just talking about the high-profile stuff but the ordinary stuff too. The images of missing children which are frantically circulated by strangers wanting to help families they have never met. The photographs of missing pets which are shared in the hope that they can be found safe and well. The wedding ring with an inscription or the well-worn and clearly well-loved teddy bear which are found and picture’s shared in a bid to find their owners. The heart-warming moments of courage overcoming adversity and the inspirational speeches which are shared and rightly so ‘go viral’. It’s all amazing and though people are quick to criticise social media at times I do think we need to take a moment to realise that there is a lot of amazing content reflecting a society which is more kind than it is cruel.

For us personally, I am touched by the wonderful messages we receive all the time (more so recently after the media attention). People even taking the time to translate their language so that I can understand how much they wanted to express their support! The messages where our journey has resonated with someone who is living a similar ‘altered life’ and I feel very privileged when they share their story with me too.

I have been overwhelmed by the sheer volume of retweets, shares and comments on my initial tweet and Facebook status for help in confronting Instagram. A clear signal that there are more people wanting to support us than attack us. One person might have offended and enraged me but over 120,000 supported me and restored my faith in humanity and social good.

Alone, I had no chance of a response from Instagram let alone an apology but with the public outcry and support, I received both as well as my images restored. The publicity also inadvertently helped me to promote the very awareness of facial disfigurement that I am trying to achieve through my blog and social media.  None of that would have happened without their help. People power at its very best (if you are someone who retweeted or shared my posts then thank you)

Social media can no doubt be a forum to raise awareness and ‘do good’ in the world. To bring attention to a wider audience than ever before. To encourage participation in charity events such as race for life. A way to inform, educate and inspire people. To offer hope, encouragement and support. To address policies and procedures which might otherwise be allowed to continue.

I really do hope that Instagram take a long hard look at their moderating procedures now and make the much needed changes. And while I appreciate that the task is a daunting one for a media giant like Instagram with millions of users, their social responsibility to protect and support those users is equally significant.

As Spiderman says ‘with great power comes great responsibility’ and while I don’t see any heroes at Instagram’s end of this story, I see thousands of heroes in the individuals who supported us and continue to share the ordinary and extraordinary triumphs and achievements of life on social media. Let always ensure that we are working together for a better tomorrow.