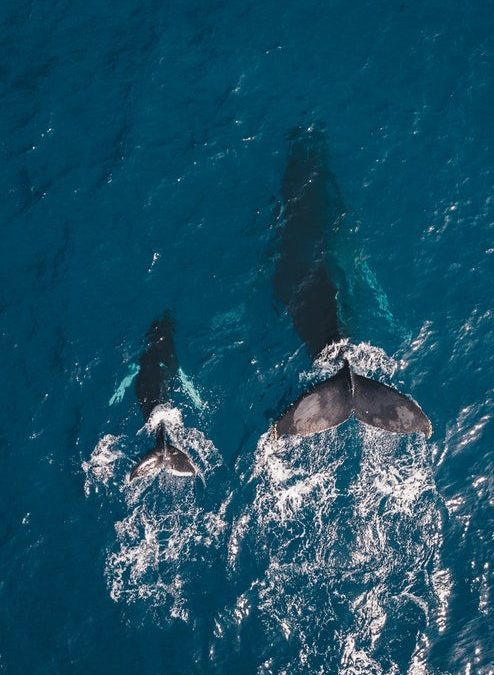 My boy is growing up. Although Harry is almost 14 years old, he has always functioned at a much younger age. In many ways, he still does; He is obsessed with Vtech infant toys and still needs a lot of help with getting dressed and personal care. His communication is very delayed and there are times when even I struggle to understand what he is trying to tell me although for the majority of the time I know because I know Harry and the ways that he communicates which are specific to him. He still wakes through the night or can be awake from anything after 3 am in the morning for the day. He has no idea of danger and has to be protected from his own curiosity most of the time. So yes, in many ways, he is still on par with children much younger than him.

For reasons like this, as well as the fact that Harry will never function at the same level as his chronological age, I have called him My Eternal Boy in the past. The boy I will always have to look after and look out for, and I am more than ok with that. But recently, I have realised that maybe Harry wouldn’t be ok with the label I so affectionally apply. Maybe, as he continues to develop, albeit slowly, he would feel patronised by the notion that he will always be a child. I don’t know and Harry will never tell me of course but recently, I have seen signs that he is developing in a way that young children don’t and that maybe, although my intentions were good, the ‘Eternal Boy’ is no longer the best way to describe him. I am proud of the ways in which he is maturing but it also scares me too. The child I want to protect and nurture is becoming a young man who doesn’t always want my input or opinion. My boy is growing up.

When using the toilet or having a bath, Harry will now forcibly evict me from the bathroom. In the past, he has been happy for me to stay and help him when he has needed it. Now, I am told “DOOR!” and when I am allowed in, the toilet is often full of reams of roll or it has unraveled along the floor like the Andrex puppy has been on the rampage.

He is making his own decisions.

During the school holidays, I gave Harry some options of activities to do. I assumed he would choose bowling as he likes the dark alleys, flashing lights, and music. But he chose the cinema. I asked him a few times, with the options in a different order, and each time he chose the cinema. When we did go, he absolutely loved it! If I hadn’t thought to give him the choice, we’d have gone bowling, but I want him to have a say in his own life, even when his answers do take me by surprise. 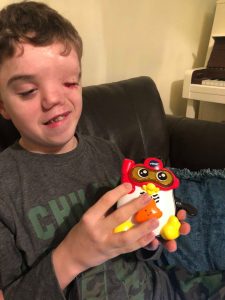 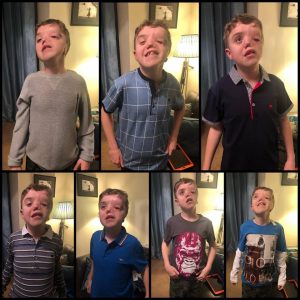 He is also becoming very particular about the clothes he wears. The t-shirts I have chosen in the past for him are no longer acceptable and he will spend a long time deliberating in front of the wardrobe at the weekend. I asked him if he wanted to go clothes shopping during the holiday and my question was met with an emphatic yes! Of course, when Harry hears ‘shopping’ he automatically thinks ‘toys’ so we ended up with a Vtech penguin as well as a selection of new and very smart shirts. I have to say; my boy definitely has an eye for fashion (just the one!)

He is beginning to take the initiative.

Harry will get his own drink of water at times (although I have to make sure he uses the right tap and doesn’t overfill his glass) and on a recent trip to a hotel in Nottingham, he took the suitcase from me and walked ahead to the lift after checkout. To anyone else, it would have looked like a teenager helping his mum. To me, it looked like the loss of my eternal boy. And that’s ok. *wipes tears* 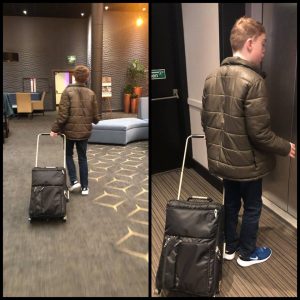 He is moving away from the familiar.

Every school holiday I take Harry to the same trampoline park. There, we spend an hour on the same rectangular trampoline and Harry insists that I hold his hands and bounce with him. Sometimes I need to sit down and he sits with me, other times I just need to rest my calve muscles and I stand at the side but I encourage him to keep bouncing. Recently, we visited the centre and Harry was happy to bounce without me. Then he climbed up onto a large foam block that others were jumping off, and he rolled onto a DIFFERENT rectangle where he continued to bounce. He didn’t even look where I was. He was just happy to be bouncing. Somewhere else. Without me.

Most parents won’t give this a second thought. They are used to their children bouncing around the centre and returning only for refreshments or a quick chat. They don’t expect their child to want them at their side constantly. So, to be THAT parent for a moment was surreal, and a bit emotional.

You see, although I am incredibly proud of Harry, all that he is doing, achieving and becoming, I also feel a little scared. Scared that as he grows, he will need me less. That I will become redundant as his carer. I hope for it for his sake, but in all honesty, it makes my heart ache for myself. 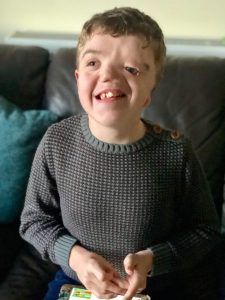 It took me a while to come to terms with the fact that Harry wouldn’t enjoy the same level and types of experiences and independence as his twin brother Oliver. It felt like forever before I became the mum that Harry needs; a fierce advocate for his rights and choices. It’s a responsibility that I have come to take very seriously and looking out for Harry whether that is in a practical, emotional, financial, social way, has become the very fabric of who I am. But now my boy is growing up. He doesn’t need me in the same ways that he once did and although he will never be completely independent, I feel that its time I retired the ‘Eternal Boy’ accolade and accepted that the only thing eternal in our relationship is our love and the gratitude I feel that he is my son.

If you enjoyed this blog you may also enjoy…

The emotional conflict of letting my boy grow

3 reasons why I need to let my son struggle