The Maternal Mental Health Alliance reports that more than 1 in 10 women develop a mental illness during pregnancy or during the first year after having a baby. For this reason, they refer to maternal mental health as perinatal mental health (to include the duration of pregnancy as well as post-natal issues) They also report that 7 in 10 women will hide or underplay the severity of their mental illness and that suicide is a leading cause of death for women during pregnancy and one year after birth. These are startling figures and yet, should we be so surprised?

We live in a society of constant pressures and opinions on topics such as breast feeding, co sleeping, whether working or stay at home parenting is ‘best for the child’ and then there are the glossy highlights of parenthood constantly invading our homes from social media. And that’s before we factor in the effects of hormones, a lack of sleep and the enormous changes to our bodies and every aspect of our lives. Personally, I think it’s amazing that more mothers DON’T struggle!

I myself struggled massively after the birth of my twins. I had been determined to have a natural birth. I wanted my fiancé to see me deliver his babies into the world and feel a new love and pride in me! However, as I was dilating, it was discovered that twin one was breach and I was rushed into theatre for an emergency caesarean. I already felt like a failure at that point! (I don’t anymore – read my c section blog for more on that!) 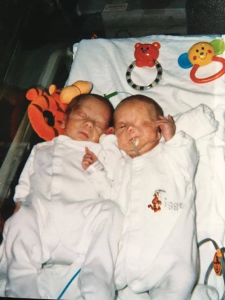 My twins were born at 32 weeks and each weighed 3lb 9oz, and twin two (Harry) was born with a rare craniofacial condition which meant that only half of his face had developed. He was missing an eye, eye socket, ear, nostril and had a short, underdeveloped jaw. We were also told that there could be issues with his spine and brain development. My world collapsed in an instant.

I had taken for granted that I would have healthy babies and completely blamed myself for Harry’s condition but I didn’t share this with anyone and I was never asked how I was coping with the news. 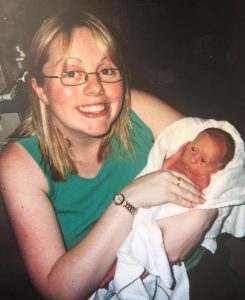 Ultimately, I smiled on the outside and combusted on the inside until, six years later after the breakdown of my marriage and severe sleep deprivation with Harry who by then had been diagnosed as severely autistic, I believed my boys were better off without me and planned to take my own life. My mum, who knows me better than I know myself, sensed a change in me and quizzed me enough to know that I needed immediate help. She practically dragged me to the doctors where I sat, head bowed and full of shame as I was prescribed the medication that I believe saved my life.

Now, I wish I had visited my GP sooner but looking back, there were a few reasons that stopped me. First, everyone was telling me how strong I was and I felt that I had something to live up to; that I would disappoint people to admit otherwise. Second, I wasn’t given the opportunity to talk to a professional. If counselling had been compulsory after an unexpected diagnosis like Harry’s, even just to check how I was feeling, then I believe I would have received the help I needed sooner and would have been able to work through my feelings. Finally, I believed it would pass in time and told myself that it was natural to feel shocked in my situation. Of course, this is true but the unaddressed guilt and grief only compounded over time and wore me down until I feared waking up in a morning because I didn’t recognise my own emotions anymore. No-one should ever feel like this. 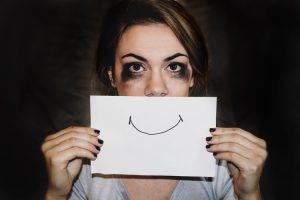 It’s true that I didn’t want people to think I was struggling with a journey that many gush about and portray as so rewarding and effortless but more significantly, I didn’t want to admit it to myself. As with any mental health issue, that acknowledgment can be both terrifying and liberating. 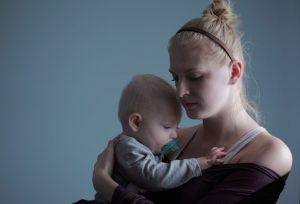 There is still a lot of stigma around maternal mental health and a reluctance to admit the struggles and ask for help are common comments from those who have suffered. That’s why it’s so important to share stories and open an honest dialogue of non-judgmental understanding and support. I asked a few other blogging parents for their experiences and rather than select a few to avoid writing an enormous blog post, I have included them all in a separate post called ‘Maternal Mental Health – Signs, Stigma and Solutions’ Please do take the time to read and share the stories of mothers to help raise awareness support for those struggling in silence.

There is no shame in getting the help that you and your family deserve.

If you enjoyed this blog please also check out…