Looking for solutions to nail biting!

Does nail biting run in the family? I would have laughed at such a suggestion until I looked into it a little more as I searched for ways to help my son Oliver stop biting his own nails. Nail biting is just one of a few body-focused repetitive behavior disorders (BFRBDs) as classified in the latest edition of the Diagnostic and Statistical Manual of Mental Disorders. Who knew! Some people have linked nail biting and higher than average rates of mood and anxiety disorders in immediate family members and suggested that children are more likely to nail bite if their parents did. That is certainly the case for me and Oliver. 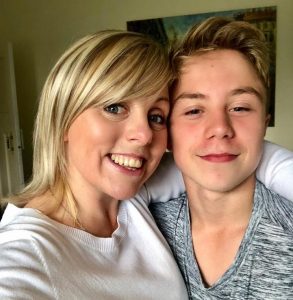 I was a terrible nail biter when I was younger particularly around periods of stress. I tried many times to stop but more often than not, didn’t even realise I was doing it until someone told me about it. History is now repeating itself with my son and I find myself constantly prompting him to stop. I have blogged before about Olivers anxiety and he has had an unsettled start to a new school which may have made things worse but I do think that it’s simply just a habit now. This week he has developed an infection around his nail bed and we have visited the GP for some antibiotic cream. My brother was, and still is, a prolific nail biter and had nail infections (whitlows) often. Even my tales of mum plunging his finger into boiled water before piercing the skin and squeezing yellow infected gunk out of his hand, haven’t been enough to deter Oliver from munching on his fingers (I promise I feed him well) So what else can I do?

A few suggestions include –

The foul tasting nail varnish available in most chemists is designed to make biters recoil in disgust when they absent-mindedly have a nibble. Unfortunately, I quite liked the taste (rolls eyes) and it seems that Oliver doesn’t mind it too much either so this has proven to be ineffective for us both.

Some parents such as Jess have resorted to removing any temptation. She said “My son used to bite his fingernails and so I would regularly cut them short. Not too short that they hurt but as short as I could and it stopped him doing it since there wasn’t really anything to bite! I did have to cut them really regularly to keep them super short but once he got out of the habit of biting them I could leave it a little longer between cutting them. I still keep them super short though to stop him!” This is certainly something I will try once Olivers nails have grown past the stubby bitty stage which looks unsightly (and ironically then leads to more stress and anxiety which increases the likelihood of nail biting) 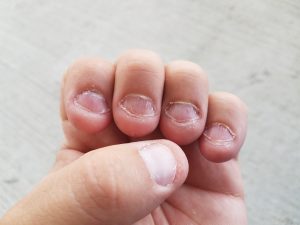 A teacher at school joked that perhaps Oliver should tape his fingers up so that he physically can’t get to his nails and he keeps returning to this idea. I’m not sure how practical it would be, to be honest, but it’s perhaps something to try over the summer holidays when he isn’t writing as much. Looking like the most accident-prone teenager in Staffordshire with 10 fingers covered in plasters would be a small price to pay if it meant he stopped biting.

People who habitually bite their nails often do so when they feel, nervous, bored, lonely, or even hungry. If people are aware of the most common times for them to bite their nails then there is a chance that they can do something to prevent it or certainly be more aware and hopefully stop biting sooner.

A stress ball or silly putty can be used as a way of keeping fingers busy but I wonder how likely it is that someone will always reach for these distractions if they’re not even aware that they are nail biting in the first place. Janet also suggested a sensory alternative like something fluffy to stroke or worry beads but rightly points out that you need to experiment to find what suits your child.

One reason that has been suggested for why people bite their nails has been due to a lack of calcium and magnesium. Adding foods rich in these ingredients may help and will certainly help with nail growth and repair. It also provides the perfect excuse to drink milk and eat dark chocolate!

Maybe not one for Oliver but often, painting nails or having a manicure increases pride in your nails, makes you less likely to choose to bite them and if nothing else, is a little more obvious as coloured nails find their way to your mouth.  I have had my nails manicured several times and loved the way that I was able to express my personality through different colours and designs.

I haven’t bitten my nails to the degree that Oliver currently does for years. So how did I stop? Well, I would like to say that it was through an increased self-awareness and incredible self-motivation. In truth, the only reason I stopped was that in working in a bank, I was handling money daily which often smelt, and made my fingers stink, of people’s urine! The waft of some dodgy pee at the ends of my fingers was enough not just to put me off nibbling but made me feel quite sick. I also do think that if you can get to a certain length and condition of your nails that you feel proud of them then you are less likely to bite them again but that takes a bit of time.

So the options for Oliver are work experience in a bank, plasters on each finger or a quick manicure (which I will photograph for bribery later on!) I’m not sure he will be a fan of any of those but one things for sure, I’m not peeing on his money to prove a point! I want to help him but even I draw the line there. Any suggestions?

You may also enjoy reading;

Beating anxiety – one school trip at a time