Looking back and moving forwards in an altered life 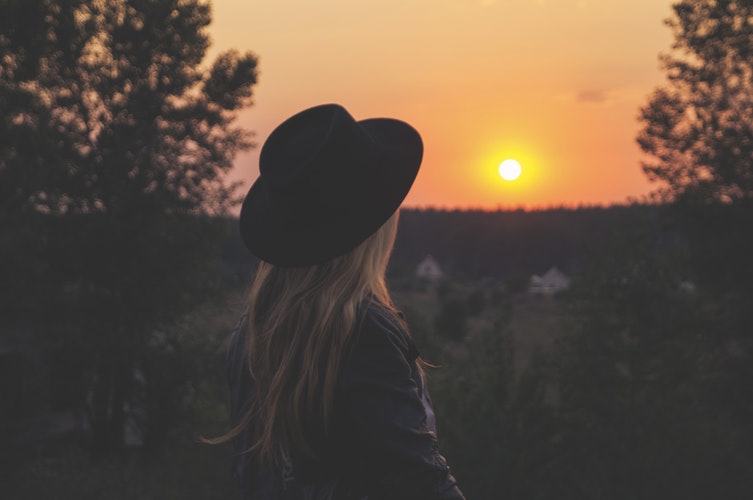 Looking back in life isn’t always the best thing to do but often I find myself remembering a time when life was so very different and comparing it to life now.

My friends’ babies came home with balloons and stuffed teddies. Harry came home with a list of professionals who would be ‘popping in’ to advise me on how to help him develop over the next few months and years. One of those was a physiotherapist who encouraged us to use an illuminated ball in a dim room. We moved the ball slowly in front of Harry from left to right to encourage him to track it and strengthen the left hand side of his neck. With no left eye there was little reason for him to turn so we had to give him a reason. We did this night after night and at the time I wondered if we would ever stop, if there would ever be a night that we wouldn’t dim the lights and perform the ‘light dance ‘for Harrys benefit. Twelve years on and Harry turns his own head just fine and it’s been a very long time since I thought about that ball. My point is, that although things feel tedious and painful at the time, they have a way of passing without you even realising. I couldn’t tell you the point at which we stopped the exercises but here we are today. Ball free. The heart ache and torture of repetition long forgotten.

He has come such a long way and it got me thinking about the other things that have changed in our lives over the past few years that were difficult at one time.

Like using the hoover. The noise was too loud and intense for Harrys delicate sensory disposition. I only hoovered every few days (I’m not complaining about that) when Harry was out or downstairs with my Nan or Mum with the television blaring and I was as stressed as he was oblivious for those few moments. Similarly, hand dryers in public toilets would send Harry into a head slapping, screaming frenzy. I would take him into the cubicle with me like someone who was peeing against the clock, dreading the moment someone casually wafted their hands momentarily under the dryer, sending my son hysterical. I reassured him every time and yet now, I don’t have to. I don’t dread the noise and I think you’ll agree from this little surprise when I walked into my lounge recently that not only does Harry not mind the noise of the hoover but he positively loves it! (great news for the house hold chores. Next week, dusting!)

Another sensory invasion was the food which dared to touch Harry’s chin as he ate – a string of cheese from a pizza, some spaghetti, a baked bean. If it so much as touched his face he would have a huge meltdown. Feeding Harry became the equivalent of playing that wire game of not touching the sides. The ultimate test of a steady hand. If Harry’s food landed anywhere other than in his mouth then his siren would scream. Meal times were stressful to say the least and although Harry will still complain a little if food offends his face, his complaints are a far cry from the screams he would have unleashed when he was younger. Again, I don’t know when it changed. Did it happen slowly over time or did it just stop suddenly one day? I just don’t know.

Aside from sensory offences, Harry would also have a huge meltdown if I had to reverse the car. I can only assume that the motion of moving backwards felt too alien for him and without the means to communicate, I was unable to explain why we were moving backwards or reassure him that we would soon stop. If I reversed the car he would scream and kick out like a bucking bronco sometimes hitting the seat, sometimes hitting his brother, always hitting himself. I’ve said it before and I’ll say it again, Oliver is the hero of our story.

While the reasoning for some reactions isn’t clear, I do understand Harrys fear of a haircut. This is quite common in many children, especially those with autism but for Harry it had an extra sinister association.

When he was 18 months old he had an operation, which involved inserting a reservoir under his scalp that me and his dad had to inject with saline solution every two weeks. He soon realised that when the dining chair was placed in the middle of the room and the sterile kit appeared, the injection was next and he was hysterical. Every two weeks for a year. So it really is no wonder that he found it terrifying to have someone approach his head for a hair cut (even when it was his Dad who is a barber) His dad persevered, as you have to if you don’t want your child to look like Worzel Gummidge. Recently, Harry sat in my kitchen as his Dad cut his hair and you would have never known the trauma that it had once caused. Somewhere in between the sweating, restraining, reassuring and explaining and Harry laughing while the vibrating trimmer tidied his hair line, my boy simply accepted the process and relaxed. I just don’t know when it was. 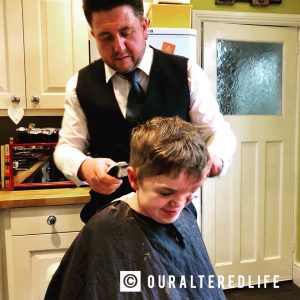 Of course, as well as now tolerating the things he used to hate, Harry has developed in other ways. His writing has always had to be very guided and modelled, taken slowly with patience. Recently at Oliver’s parents evening his English teacher gave Harry some paper to draw on while we chatted. Casually I suggested he wrote his name, as I know he can do that, and I continued to talk to the teacher. After a few minutes I looked down to see that not only had he written Harry but he’d also written Mum! I sat listening to the fantastic academic progress of my eldest son while simultaneously marvelling at the spontaneous gift in front of me too. Progress and success comes in all shapes and forms. Living with autism reminds you of that constantly.

Another indicator that Harry is developing is that he has started to choose his own clothes. There was a time when my tigger-esque boy would let me dress him in fleecy trousers and t-shirts so that he could bounce in comfort. Not a cat in hells chance now! He wants jeans and a smart t-shirt. He throws my choices back in my face and grabs the items he wants as he says “dat one! dat one!” It can be frustrating at times but more often than not he makes me smile and very proud to see him taking pride in his appearance. When I showed him his reflection the first time he tried on a shirt and tie for my sister’s wedding he stroked the waistcoat and simply said “nice”. My heart melted. 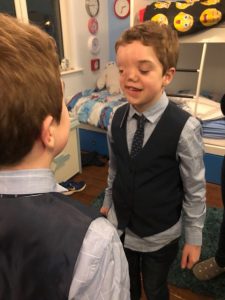 He has come so far in so many areas but if you had told me this while I was ‘fire fighting’ the outbursts and living life on repeat in slow motion I would never have believed it. In many ways the development of a child with special needs is more sporadic than ‘typical’ development. I have always explained it as ‘spikes’ of development in between periods of plateau and yet there have been no sudden jumps in progress in any of these cases. In fact, for a couple of them, it wasn’t even me who realised but my fiancé Andrew (read my interview with him on Autism from a step-dads point of view but be warned, you will fall in love with him a bit and he’s already taken!) These changes have crept up on us like Summer from Spring.

Do I worry for Harry and the future? All the time. I worry about the sort of life he will be able to lead and I am terrified about what will happen to him when I die but I am working on a plan for that – his life after my death and hope to blog more about it to help other parents with the same fears.

But then I sit and reflect on how far Harry has come and I wonder…just how far will my boy go? And that excites me and fills me with hope.

I tend to live my life by quotes and am big believer in ‘don’t look back, you’re not going that way’ but I also think sometimes you have to take a quick glance over your shoulder to be reminded that ‘it always feels impossible until its done’

I don’t know which of Harrys current struggles he will work his way through next but what I do know is that he is capable of so much more than anyone, including me, has ever thought and that I am so incredibly proud of all that he is and is yet to become. My sunshine boy. 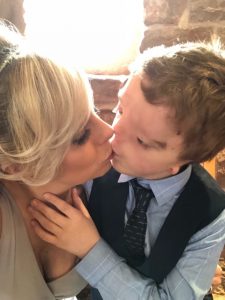 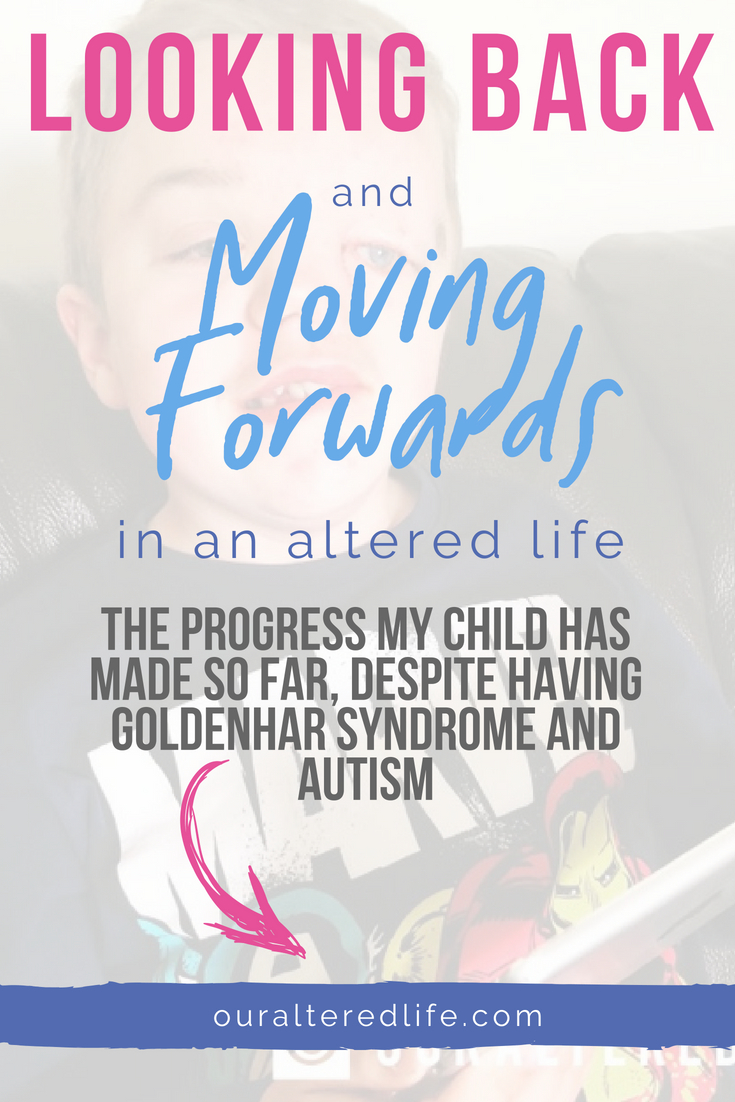