Do I wish I’d known about my baby’s facial disfigurement? 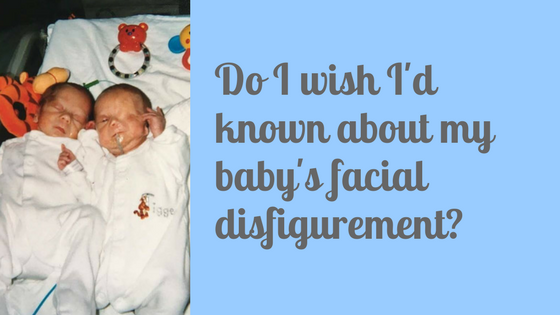 Every time I went for a pregnancy scan I was excited. I was cooking not one but two little people (insert smug emoji face) and I loved seeing their tiny bodies on the screen before me and hearing the rhythm of their drumming heart beats. Never, not once did I imagine that I would be giving birth to anything other than two healthy babies. The reality of my boys’ birth was very different. I went into spontaneous labour at 32 weeks and my boys were born by emergency C-section (neither of which I had wanted). They were whisked away to special care as we had expected and a few hours later we were told that twin two (Harry) had been born with a very rare condition called Goldenhar syndrome which meant that on his left-hand side he had no eye, eye socket, ear, nostril and he had a short under developed jaw. To say I was stunned is a massive understatement and I have explained more in the moment that changed life forever as well as given 11 top tips when you have a special needs baby.

Recently I have been asked if I wish I’d have known about Harrys condition before he was born and my answer is never a straightforward one. Here are the reasons why I wish I had known and the reasons I am glad that I didn’t. If I had of known about Harrys syndrome I would have had time to prepare mentally and emotionally to some degree. I would have researched the condition and known what to expect in terms of his appearance. I would have known about the various ways that Goldenhar syndrome affects babies and been aware of the worst-case scenario in my head so that I was as prepared as you can be for his arrival. Knowing that his spine looked unaffected in the early hours of his life would have been a relief and not just another terrifying ‘what if?’

I could have also prepared my family and friends. In the early days, being strong for them was incredibly hard as I was imploding behind a smile. I am the sort of person who takes pride in being able to help and guide others (I think that’s what makes me a good teacher) and so to not have the answers made me feel like more of a failure at the beginning. If I had known beforehand then I know I would have felt calmer and more confident in explaining the syndrome and its possible implications to others. Some people will say that other people’s thoughts and feelings didn’t need to be a concern for me in the early days but one of the lego blocks of who I am is that I am able to reassure the people who mean the most to me. I couldn’t do that for such a long time and it was one more factor that damaged my sense of self.

No mother should ever say that the day her child(ren) were born was the most traumatic day of her life. But for me, it was. I remembered the moment the doctor came with his news at 10.30am every year on the boys’ birthday for years. And it wasn’t just a fleeting memory. I vividly relived the doctor’s words, his gestures and I felt the searing pain, the crushing sadness and the overwhelming guilt as if it was happening all over again in that very moment. Over the years the duration of this got shorter but looking back now I do think that I had a form of Post Traumatic Stress Disorder (PTSD) as well as Postnatal Depression (PND). If I had known about Harrys syndrome then I know for a fact I wouldn’t have relived that moment over and over again. It was the shock of the news that trapped me in that moment and replayed it on some sort of torturous loop for years. From the moment I peed on that stick and saw the life changing blue line appear to the day I delivered my boys I felt amazing. To know that Mark and I had created another little human was fantastic. To find out that we’d somehow managed to make two was overwhelmingly incredible. I know people who have struggled to conceive and I know it’s not an easy process for many so I felt blessed to be pregnant and, if I’m honest, a bit smug to be carrying twins. I felt like I needed a ‘SU’ t-shirt and cape (Super Uterus in case you’re wondering).  I watched all the twin mum programmes in the name of research, I ate for three (still do unfortunately!) and I LOVED telling people I was having twins. I do have to say I wasn’t a fan of having my bump caressed by strangers, what’s that all about?? And there are some things that you should just never say to someone carrying twins but I can hand on heart say that I felt complete, full of love, hope and joy for the 32 weeks that I was pregnant. Knowing about Harrys syndrome would have changed all of that. I am thankful that I can look back on a pregnancy free of worry and stress – the following 12 years have provided me with more than enough! Looking back on my pregnancy makes me feel so happy.

As soon as the boys were born I felt different to the ‘other mums’. I didn’t get to take my babies home straight away, or swap labour stories in the mother and baby groups relaxing over a cup of tea (I’m sure it’s not quite so twee but I just have no experience). My health visitor didn’t disappear after a few weeks in fact it felt like a new professional every week came into our life to give us advice on feeding, sleeping, vision, hearing, posture, reconstruction etc. As well as drowning in dirty nappies I was being dragged into the quicksand of depression and grief. Quite frankly, the early weeks were hideous. I was never the mother I planned to be and although in many ways I am sure I’m better, I am always grateful that for the duration of my pregnancy I was the same as any other expectant mother. I have that in common with other mums when we chat about life with our children now. Sometimes that’s all I have so I love it even more.

If someone had told me during the pregnancy about Harrys syndrome I may have been given the option to terminate the pregnancy (not sure with it being a twin pregnancy actually) or consider adoption. I would have taken neither option. That’s not to say that I’m any better than others that would have done and I’m not judging but the news wouldn’t have made any difference to our life now. He would still be my boy. Life would still be the confusing, all consuming, chaotic mess of love, laughter and lessons as it is today. Knowing would have made no difference to the boy he is and though it might have helped me to prepare mentally and be more ‘present’ with the boys from their birth I think we’d have got to the same place eventually. Him as my sunshine boy, me as a mother dependent on cheese and gin. Somethings are just meant to be.

So, there you have it. I still don’t know if the answer is a yes or a no but I do know that thinking about the past doesn’t change the future. I chose not to pursue any potential claim against the hospital for the trauma experienced from not knowing. I preferred to invest my energy in moving forward and at the beginning that was painfully difficult. Like rehabilitation after a car crash it was one foot in front of the other. One step at a time. Eventually I walked alone and now I pretty much sprint…..usually to the cheese aisle.

But more importantly, I’m in love with a life I would have never chosen. Like I said, some things are just meant to be.