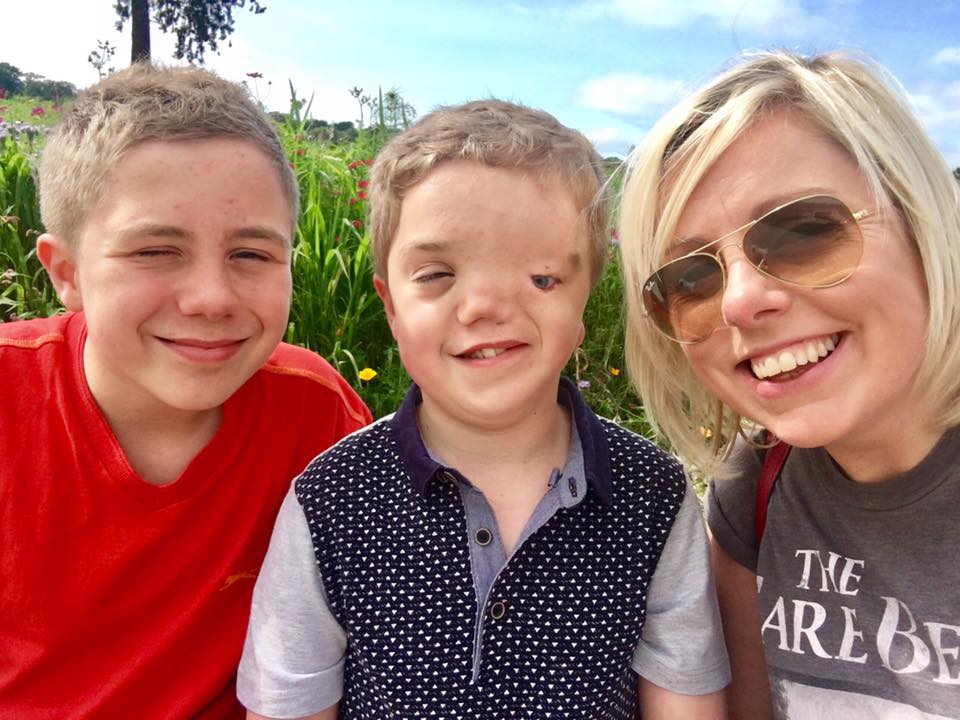 I have recently embraced the 300mph life in the social media fast lane of twitter! Generally, I have to say that I am really enjoying it (the hilarious gifs and sarcastic tweets are just brilliant) but recently I have seen the ugly side of social media on there.
I am used to trolls and have written in the past about dealing with them. I have regular comments and private messages on my Instagram account calling my son some truly horrific names and saying things like “he should be killed with fire” (yes, I’m sure their mothers are proud) but never on Instagram have I been accused of ableism.
Wiki defines ableism as

Ableism is discrimination and social prejudice against people with disabilities. Ableism characterizes persons as defined by their disabilities and as inferior to the non-disabled.

Never once have I felt that Harry is inferior to Oliver or anyone else for that matter but suddenly, with so many vicious tweets and comments (one woman tweeted that I was abusing my son – yes, I did discuss liable and police action), I found myself

doubting everything I was writing and wondering if in fact I was an ableist in denial. I’m sure the individuals who hounded me will be thrilled to know that. There were a few points that were made about me on TwAtter (not a typo) which I have spent the last week or so considering and so I thought I would share my musings on what was said and how that will affect me, my self-perception and my blog moving forwards.

I am not autistic myself and as such, am not qualified to have an opinion.

I do get this actually. I have no way of knowing and therefore being able to describe what life is like to live with autism personally but I never claimed that’s what I was trying to do. My post was written from a mother’s perspective on living with a child with autism in the same way that someone may write about how hard it is to live with their parent’s dementia, or a loved one’s cancer. These are not always easy relationships despite the incredible love we have for those we care for and I honestly don’t think it helps anyone to pretend that they are. Yet no one is accusing people writing these blogs of discrimination. I am a parent living a life which is different to others – better in some ways, harder in others and that alone entitles me to share my experiences because someone somewhere needs to know that its ok not to always be ok with the cards they have been dealt. That’s being a realist. I use ableist language that is patronising and condescending. I call Harry my ‘eternal boy’. Personally, I love calling him that because it encapsulates everything about him that is innocent and beautiful. It doesn’t mean that I will be trying to put him on a potty or breast feed him aged 24. I was shocked at the outrage that this phrase generated. Having said that, I am more than happy to talk with people who can hold a rational, decent conversation and explain how the language I use is discriminatory. I am always open to learning and let’s face it, life without disability is a learning curve let alone with. I have seen some really great articles on the way that language can be offensive and actually it has made me think about a few things differently which I think is always a positive. However, even within the ‘evidence’ for ableism language I have struggled. One site quotes the following words as ableist which I agree with “psycho” “retarded” “spaz”. But on the same list is ‘deaf’ and ‘blind’. I am sorry but I believe these are medial terms which describe physical conditions where there is no hearing or sight. I fail to see how these are discriminatory. As I say, I am more than happy to discuss ableism language but I do think the criteria needs to be clearer. Until then, I will happily call Harry my eternal boy and feel very privileged to share the world with him.

My son would be ashamed to think that I wished he was neurotypical.

I had no idea that Harry would be born with Goldenhar syndrome and I am not ashamed to say that I didn’t cope well with the news that one of my healthy twin boys (according to lots of scans) would be facing challenges throughout his life. As much as I adore the bones of my boy now as I am positive every parent of SEND children does, never, not once, did I watch that scan monitor and hope that the sonographer would tell me that my baby had goldenhar, or down syndrome, or osteogenesis imperfecta. I would argue with anyone who says that there are parents who hope and pray for that outcome. Did I want a child with special needs when I was pregnant? No. Would I change him now, yes some days but I would also change aspects of Oliver and my partner Andrew and I have absolutely no doubt that they would change aspects of me. It’s impossible to know where a disability ends and a personality begins. Does this make us personist? Struggling with a disability or condition is not the same as wanting to change your child because if our children were to change then they simply wouldn’t be the children we know and love. I love my children because of who they are, not in spite of.

Attitudes like mine are the problem in society, not disability. Harry is 12 years old now but cognitively he has been assessed as functioning around 3 years old with a language of 18 months. Yes, I have said that I don’t know if he will ever have a job or a girl friend. I don’t say this because I have written him off for life. I say this because I genuinely don’t know, and neither do the people who criticise me for saying it. They can’t assure me that Harry will live independently, enjoy a job and go on to have a girlfriend and family. I hope and pray that he will because one day I will die and I want to know that he will be living as full a life as possible. I do realise though that there is still a huge stigma around disability and some very outdated attitudes which don’t help anyone but I truly don’t feel that mine is one of them.

I cannot speak for my son, he is his own person.

Harry is non-verbal and as such I do represent his voice in many ways. One ableist champion explained their view that Harry has his own thoughts and feelings and as such, this makes me his interpreter and not his voice. I get that and I think that’s true in

many ways too. (Note here – constructive feedback is much more likely to get people thinking than blatant abuse). Harry is his own person and wherever I can I give him the choice I do but there are some decisions that I simply have to make for him. He was unable to tell me why he was getting distressed when he went into key stage 2 at school and so I had to use my best deductive skills and go into school to address it with staff. If I wasn’t his voice on that occasion, he would have had an awful time for the rest of his primary education. He couldn’t choose which high school he liked enough to spend the next 8 years at and so me and his Dad made that decision based on what we know about our boy and which setting we believed would help him achieve the most. Should I have given him a coin to toss instead? In contrast, Harry was able to tell me which school shoes he preferred last August and they absolutely were not the ones I wanted to buy for him. So guess what I did? I bought the shoes he chose. Shocking, I know.
I never deny Harry his opinion if he is able to share it and when he can’t I don’t make any decisions lightly. I also recognise that everyone is unique and individual and as much as I admit that I can’t speak for Harry at all times, I also think that those who are talking on behalf of ‘all disabled/ autistic/ sen people’ might need to realise that they can’t do that either (not without being incredibly hypocritical).

So what am I then?

So, after all this consideration I came to the decision that while I have never intended to express myself in an abelist way, there may be times when I have used language that might offend some. I don’t think this makes me someone who ‘characterises a person by their disabilities and as inferior to the non-disabled’ though.
I also know that in voicing the worries, fears and natural emotions of having an altered life as I have, I have made a huge difference to the people who are feeling exactly the same but daren’t speak out for fear of being vilified. To know that my honesty helps someone else realise that an altered life is still a brilliant one means the world to me because that’s what I wanted right at the start of my journey. And if I have to be labelled an ableist by some to achieve that then I’m just going to have to accept that sometimes grown-ups have to agree to disagree.
I got thinking about all the places I have been and the people I have known throughout my life. The multicultural school I loved working in, the rich ethnic backgrounds of the people I know and feel privileged to learn so much about cultures I’ve not experienced first-hand, the other disabled children and their families who I have met and formed friendships with.

My conclusion is this – I am not ableist. Nor am I racist, sexist, ageist or sizeist.

However, I am twatist. Regardless of your skin colour, background, age, ability level, cognitive functioning level or the colour of your car, if you are a twat who takes it upon themselves to harass and belittle others simply because you feel that you are right to do so and they are wrong, then we can’t be friends. Not at all. I am twatist and proud and will be raising my children to be the same although probably with a different title – I might call it something like common decency.