9 tips for any professional working with a unique child. 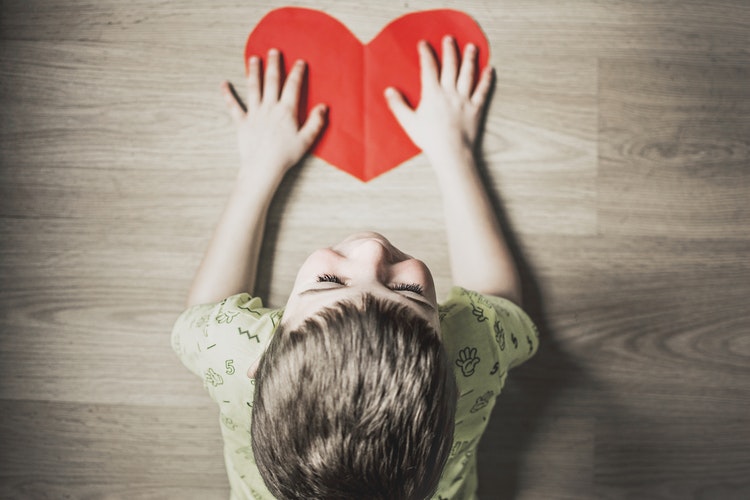 I was recently asked to give a talk at a local college to students embarking on a career as health care professionals about my experiences both positive and negative and the impact that had on me as a parent.

I have to say that I really enjoyed preparing for the talk (you can take the girl out of teaching but you can’t take the PowerPoint loving, laminateaholic teacher out of the girl!)

It gave me a chance to really reflect on what and who had worked well with us and what had gone wrong and yes, sometimes it went wrong. We often hear horror stories in the press of patients battling against the national health service – the Charlie Guard and more recently Alfie Evans cases were highly emotive battles that would never sadly result in a winner but we hear less often about the things that go well. The simple moments and the seemingly insignificant gestures that make a huge difference and stay with us as parents for a long time.

Today, I wanted to touch on some of the interactions with professionals that shaped the early years of my life as a mum in a positive as well as less than ideal way and share some experiences of other parents with altered lives too in the hope that any professionals reading this might be inspired to consider the way that they interact with parents at their most vulnerable or challenged times so that they can be a positive support. 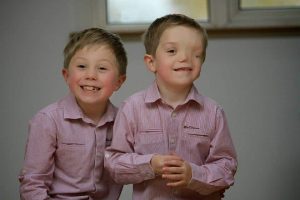 I had no idea that Harry would be born with Goldenhar syndrome and had no reason to suspect that I would deliver anything other than two perfectly healthy babies. I have blogged before about how that news changed me, how I didn’t cope and I have written to the lost mums like me to show that life does get better once the shock and grief subsides so I won’t go into that today but I will say that I blamed myself for a long time. So, when my first health visitor arrived and asked me if I thought Harrys syndrome was due to “something you did” I felt like I had been punched in the gut. My worst fears articulated by a stranger felt like an assault of bullets to defenceless soul. I was crushed. Then I was angry and asked her to leave. The replacement health visitor was incredible but that first encounter stays with me even now, almost 13 years later. Usually I am the sort of person who tries to find a reasonable explanation for situations like that but even now, I do blame that health care professional for her lack of preparation and consideration and I feel that what used to just be common sense has now become a training issue (hence why I was excited to be asked to share my experiences).

It makes me very sad that my experience of a lack of knowledge and empathy from people who really should know better isn’t an isolated case.

Miriam ~ When Isaac was non verbal at 2, I had a speech therapist visit us at home. I was low, struggling with two children with needs and worried about my son. She looked at me right in the eye and said  ‘I wouldn’t worry about a non verbal two year old if I was you. It’s if he is still non verbal at seven then there’s no longer any hope!’ That went on to haunt me as we are now at 9 and still non verbal.

Jane ~ I had a nursery manager tell me they couldn’t manage children ‘like Izzy’ but my worst was the genetics consultant who told me to have an abortion as Izzy was undiagnosed, there was risk for a future pregnancy and how would I cope with 2 disabled children . Both stick with me as horrible moments.

Lauren ~ I have a friend whose son with Down Syndrome was under orthotics and after a mix up where plates were in the wrong shoes the mum said “That must have been very uncomfortable” the orthotics specialist replied ” I wouldn’t worry they don’t tend to feel much pain.”

Hana ~ Casually dropping into conversation “it could be Rett syndrome… or something similar” then changing the subject… or the doctor who referred to Tilly as retarded.

Jane ~ When Ethan was diagnosed with autism just before his third birthday the doctor told me not to have any more children as she didn’t think I would be able to cope. This was minutes after confirming his autism to me. This didn’t help our decision to have a second baby but I’m so glad I never listened to her

Reading these accounts made me physically wince and seeing the word used to describe Tilly made me gasp out loud. I am assuming that doctor doesn’t label their black patients with the ‘N’ word so why on earth they would think that word is acceptable is beyond me and gives me the rage.

As painful as reliving these moments can be for parents they are, thankfully, only part of a much bigger picture and usually the good far outweighs the bad.

We had a horrendous experience with Harrys first operation and transferred his care after a specialist left my seething with his crass comments. Naturally, I was more than a little apprehensive in meeting the new surgeons who would be creating a face for my boy but from our first meeting the relationship was positive. The new team admitted that there were never any guarantees when working with Mother Nature but that they would always try their very best. This might sound too vague but it was a welcome relief after months of false promises. They also put us as Harrys parents firmly in charge of any decisions and only gave us options and time to consider them. Their honesty and compassion meant that we have built a relationship of utter trust and confidence in the team at Alder Hey in Liverpool over the last ten years. 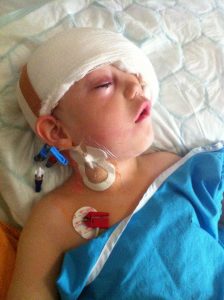 Harry after surgery in 2012

Another professional who we all formed a really close relationship with was Harrys first teacher, Lisa. I knew early on that she was fantastic at her job and she spent time getting to know Harrys personality as she decided the best strategies to help him learn. She never taught at Harry, always with him and his needs, preferences and abilities in mind. She stretched him for more than I ever did and brought the very best out in him. My non-verbal son had no problem letting me know that he utterly adored her and when she travelled 50 miles to see him after surgery in Liverpool once, he whispered her phrase “good job” when he woke to see her at his bedside. Even now, he knows that he is mummy’s “super star” and Lisa’s “rat bag” (which always makes me laugh) and I firmly believe that she helped to shape him into the boy he is today.

As with my own negative experiences, I am equally not alone in feeling the love and support of people who go above and beyond to show us that we matter.

Becka ~ Our speech therapist has been the most helpful person I’ve ever known. She listens, she tells me things straight and means what she says. She always phones back and turns up for every meeting and appointment. She even made sure she was free to come to our diagnosis meeting even though she didn’t have to be there. She’s been into the nursery to liaise with them and help them get things in place.

Hana ~Tilly’s geneticist ringing me giddy with joy and unable to stop squeaking to tell me she had a diagnosis. Or the nurses who held my hand whilst Tilly had seizures and made me tea after long nights watching her sleep

Miriam ~My GP genuinely cares for my son and understands his needs. He is not afraid to refer to specialists but also knows and appreciates that taking Isaac to a and e if often not doable. He trusts me to carry out his advice so much that when my daughter had pneumonia and should have been hospitalised he put a specialist treatment plan in place because he knew that her autism would mean she would shut down in hospital and refuse all food and drink and that I had no other respite for Isaac. He listens and if I think Isaac needs antibiotics he prescribes without hesitation. I honestly can’t fault him!

Steph ~ During a long hospital stay, a young nurse made an extra effort to come back to Sasha’s bedside to tell me that she thought I was an amazing mum who was doing her best for her child. It was just what I needed to 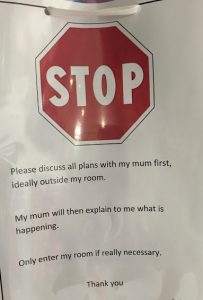 hear right at that time after 6 very tricky days in there! And of course, I’ve never forgotten it.

Also, during the same stay, the play therapist who made this sign for us so that Sasha’s distress could be minimised.

From those accounts its really clear that a few small and simple actions can make a huge difference.

9 tips for the professional working with any disabled child.

I recognise that services are under staffed and underfunded and I’m not expecting every professional to adopt every vulnerable individual they care for as if they were their own and spend hours at their side (unless they want to!)

What I do hope for is that professionals take a minute to do a bit of research where they can, to take a moment more than is needed whenever possible, to be slower to judge and quicker to listen. To those of you already doing this, you really have no idea how much difference you make to the lives of the people you touch (both literally and metaphorically). To those of you who can be better…be better. It only takes a moment but the consequences last a lifetime. Choose the type of impact you want to make and make it happen. 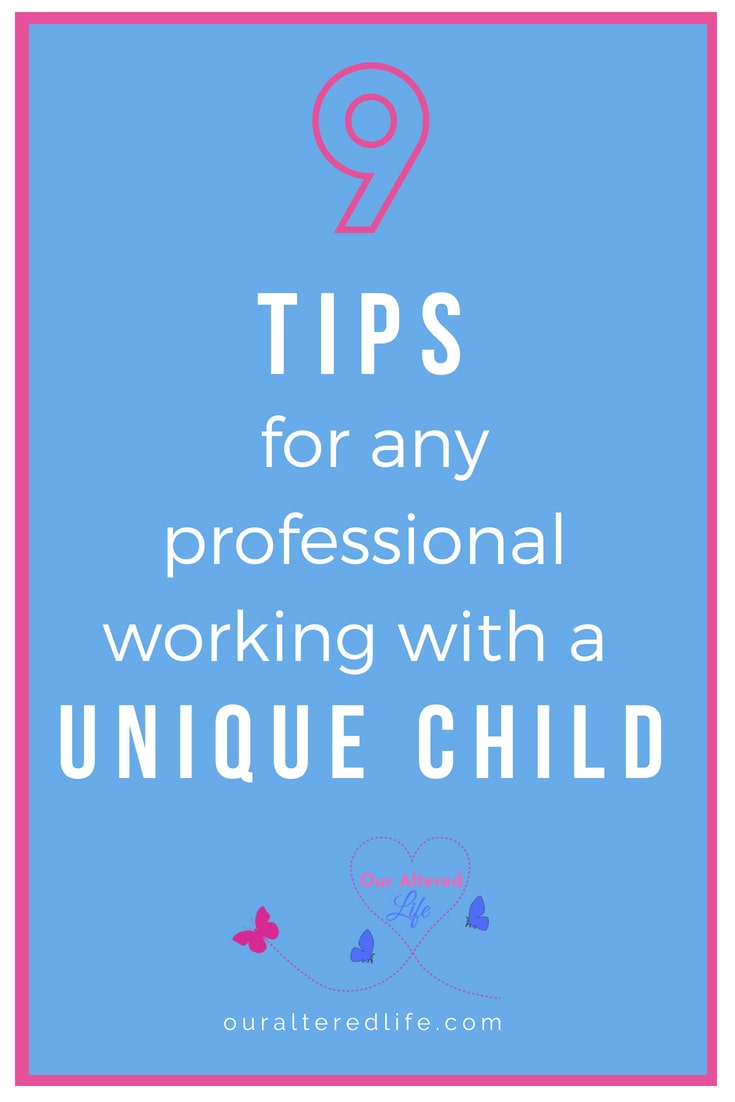