7 signs that I was struggling with anxiety

If you met me, you would probably never think that I was someone who had struggled with depression. Not the kind of person that you would ever find battling with anxiety. But I am. In 2011, years of suppressed guilt and grief after a shock diagnosis for one of my newborn twins caught up with me. My Mum practically dragged me along to the doctors in a bid to get me the help I needed but refused for so long. The anti-depressants that I was prescribed saved me and in time I wondered why I hadn’t taken them sooner! As I weaned myself off them a couple of years later I said that if ever I needed to use medication again I would do so without reservations or delay. It turns out, that time is now.

I’m not depressed this time. In fact, I am pretty much in love with my life and incredibly grateful for the wonderful people and opportunities in it. However, there are a few things going on, ticking over in the background which are playing on my mind and troubling my quiet moments. Things that I can’t avoid or prevent. Issues that only time will sort, with some pressure as I wait, and that leaves me feeling helpless and nervous. I have worried about these things for a few months but lately, the worrying has intensified and seeped into the fabric of my days and nights like ink bleeds in water.

It’s natural to worry about the things we can’t control and feel anxious at times but how do you know when the time comes to seek help? When does feeling anxious every now and then become anxiety that needs to be treated. For me, there were seven signs that individually wouldn’t mean anything but together resulted in me realising that it was time to seek help.

This, of all my symptoms, is the one that I find the most difficult. I can’t even take regular breaths let alone deep ones. My lungs feel constricted and I feel like I am gasping for air. The only way I can breathe properly is to exhale with a force which my alarms my family and sounds very much like I am massively annoyed. Oliver, in particular, is finding it hard and has asked several times for me to see a doctor as he is worried. As soon as he got into the car on Tuesday he wanted to know that I had been to get some help. If my son is that concerned, I owe it to him if not myself to get sorted. 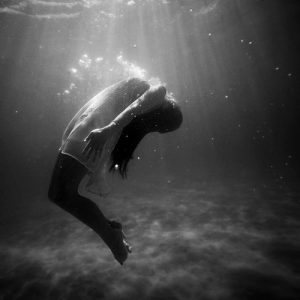 I find it almost impossible to go to sleep. My mind doesn’t so much wander, or even race but forcible ping-pong from one topic to another. Some are about worries, others are things to do or things I have or haven’t done that day. There is no order to my thoughts and they feel loud and abrasive in the darkness which has previously relaxed me. When I finally do settle off I wake feeling utterly exhausted.

On the nights I am home alone and don’t have my boys I have started to take my valuables to bed with me in case I am broken into during the night. I have never worried about this before but I panic in bed some nights now and that fear has seemingly come from nowhere.

Recently at work, I sent too many copies of a worksheet to a printer. As I stopped the printer from spewing out unnecessary papers, my breathing went even tighter, my head began to spin and I felt physically sick. I managed to convince myself that I would be released from my casual contract which would put a strain on my finances. All from extra copies! Two months ago, I wouldn’t have even worried let alone had what felt like a panic attack. This is NOT me. I work my best under pressure and generally have it together most of the time. That was the moment that I knew I needed something more than I had already been trying. 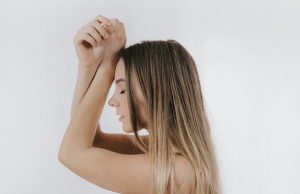 My partner laughs at my ability to ‘zone out’ to the many noises that occur within my house at the same time. Harry will be watching some noisy toy on YouTube, whilst bouncing and squealing along. Oliver will be chatting away non stop or listening to music. I will have the TV on. It can be pandemonium at times but it’s rare that I notice until Andrew points it out. Now, more than two noises at the same time feel painful to my sensitive ears. I experience auditory overload very quickly and it overwhelms and distresses me. Again, something which has never happened before.

I am barking at the boys far quicker than I usually do. Not that I have the best patience at the best of times but my fuse is even shorter now and I find myself snapping or struggling for my breath which then worries Oliver. I don’t want to be the grouchy mum who everyone tiptoes around for fear of her head coming off. I have two brilliant boys who are already far more compliant and helpful than most teenagers so again, my quick temper needs addressing.

A few days of worry and anxiety is quite natural when it comes to big life events. However, when the feelings above last for weeks and don’t subside even in situations where you actually feel rested and calm, for me that’s a huge indicator that they aren’t simply going to go away on their own. How long is too long? I think that varies from person to person. In my case, the breathing issues and dramatic overreaction to something minor coupled with the fact that behaviours and feelings above had been getting worse, meant that I needed to do something about it.

When other things haven’t worked.

Before visiting the doctor I had tried herbal relaxation tablets, meditation, bedtime reiki and some breathing exercises. Nothing seemed to help but I am glad that I tried them all first. I don’t think medication should ever be the first option if managing and controlling your own anxiety is an option but for me right now it isn’t. And that’s ok.

Too many people are scared to seek the help that they need and deserve. They worry about the side effects, the fear of becoming dependent on them, the views of other people. Too many people feel that taking medication is a sign of weakness and somehow means that they have ‘failed’ in life. I felt exactly the same before I was prescribed anti-depressants. This time is different. 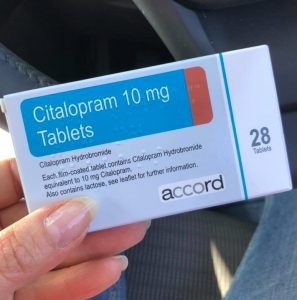 This time I know that once the tablets are in my system, I will feel calm again. My breathing will return to normal and I’ll just not be sleeping because my bladder is the size of a raisin and I need to pee 13 times (anyone else?) Oliver and Andrew will stop worrying about me. My mum will be able to pop round and chat with me without looking so desperately concerned for her little girl again, fearing that I may fall apart at any moment. Work won’t think I’m some hormonal weirdo that cries at the drop of a hat!

You see, when you take medication you don’t just take it for yourself. You take it for the people who care about you too. So I have absolutely no shame in taking the tablets for a while. I don’t plan on taking them forever but I am certainly not panicking about a timescale. I am actually looking forward to them settling into my system and getting the elephant off my chest. Sadly though, mental health is still the white elephant in society. That’s why I am sharing my news. Because its OK not to be OK and in fact we owe it to each other, to be honest, and let each other know that we see their struggles, we understand and even empathize. Maybe if we accepted each others’ struggles more, the ludicrous idea of ‘perfection’ that we wear ourselves out trying to achieve would diminish and as a result, we would struggle less. Just a theory.

So that’s my news for now. I’m not too sure its something that I will blog much about as I’m not dwelling on the anxiety I have but am focusing on all things positive and productive from here on. But I was inundated with messages and comments after my facebook post which tells me that its something people needed to hear. That yes, even people who appear to have it all together can struggle and that there is no shame in reaching out for help. You’re never the only one and you are never alone.