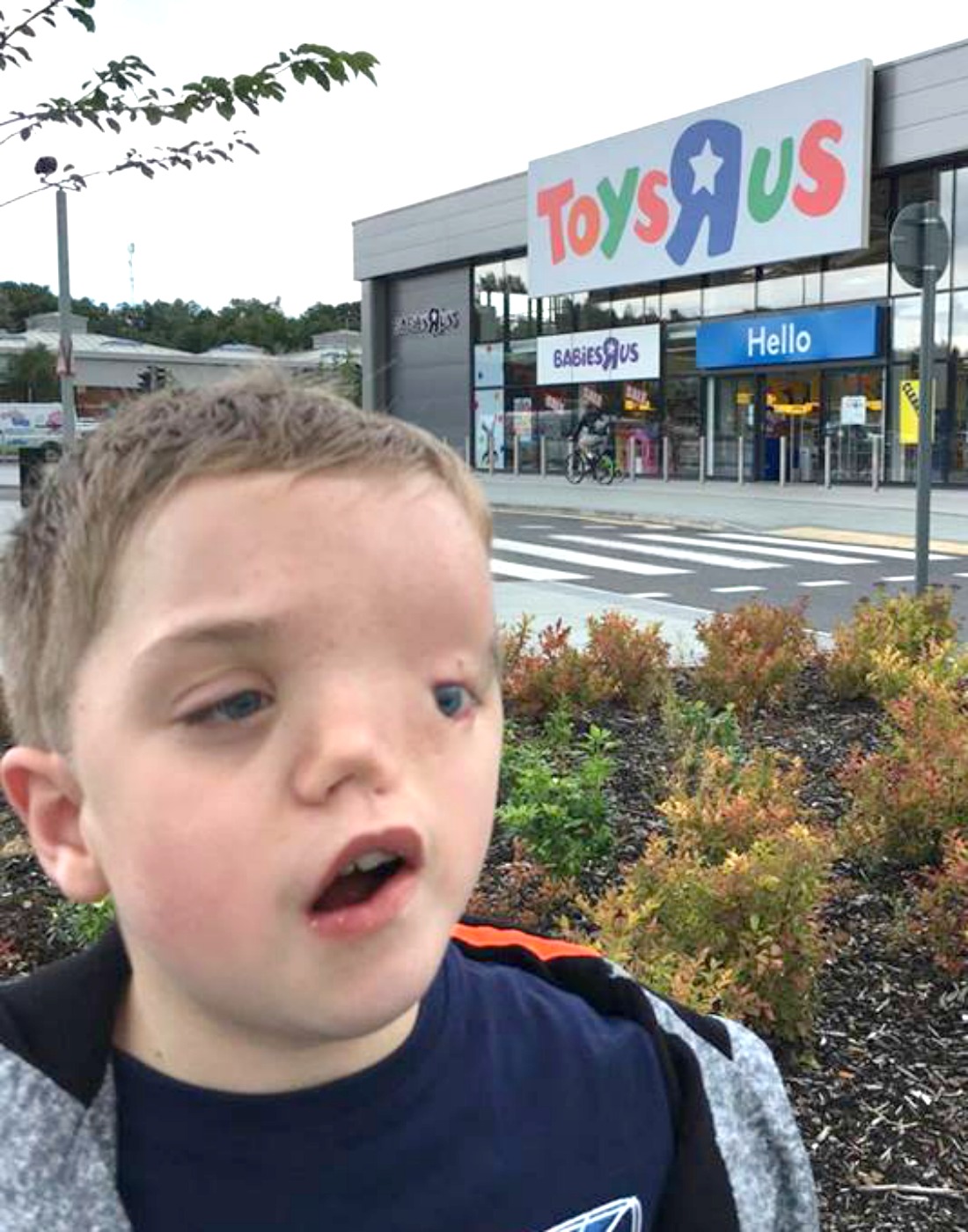 Harry turned 12 at the end of June. He loves the thrill of unwrapping gifts (although be warned, unless it’s a remote control he’s not interested. Even if the gift you thought he’d love cost a fortune. He’s a mote fan!) However, even more than that he absolutely adores the experience of visiting a toy store, usually Toys R Us (other stores are available). So, my sister, Emily promised Harry a birthday shopping experience. She’s a nurse (and has the most ridiculously jam packed social diary in the world) so pinning her down to a date was tricky but finally we sorted a Saturday morning and Harry was prepped.

I explained that Emily would be taking him birthday shopping a couple of days earlier so that it didn’t throw him on the day. Harry is technically non-verbal and as such, cant ask me as Oliver would “How long is it now until Auntie Emily takes me shopping?” Instead, Harry asks “And then?” meaning what’s next. I explain the next part of his day after every ‘and then’ and we only stop when we reaches the place he’s waiting for (example….and then? Lunch. And then? Go for a walk. And then? Dinner time. And then? Bath and pjs. And then? Sleep. And then? Dressed and breakfast. and then? Birthday shopping with auntie Emily). Consider it a verbal bus journey where destination is key. He loves to know his routine and how long he’s got to wait until whichever event he’s looking forward to. 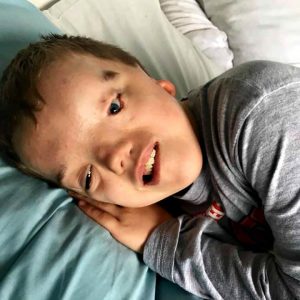 As the Saturday morning approached, he was getting extremely excited. His stimming behaviours (jumping and flapping) were in overdrive and he was randomly bursting into fits of laughter which was contagious and set us all off with the giggles. On the Friday morning, he asked me ‘and then?’ and I replied with the events for the next 24 hours. Moments later I wondered where he had gone. I discovered him back in bed pretending to sleep and when I asked what he was doing, although I already knew, he told me “Seep and den birfday shopping”. His humour cracks me up.

By 11am on the Saturday morning he was ready to burst with excitement. Harry is obsessed with Vtech toys and for years I was tortured by the irritating music and synchronised ball popping of the ball machine which he loved (I know that I should love it too if it gave him happiness but I didn’t!) Thankfully he has forgotten about it now and my sanity is just about restored. He told me every few minutes that he wanted a “Vtech turtle”. I asked three times what he would buy if the turtle wasn’t there but each time he replied “Vtech turtle” so I hoped and prayed that it would be in stock.

She had other places to visit and ordinarily I would say to visit them first on the promise of toy shopping at the end but Harry was too wired for that. I knew that he needed to get there straight away and any delay would only distress him.

Emily has taken Harry out before but I needed to give her the instructions, as much for my own peace of mind as it was for Harrys safety.

Park as close to the store as possible

The local council have issued a disability parking badge to us because Harry has no sense of danger and will (and has!) dash across car parks or roads if he simply can’t wait to get inside the building. He doesn’t see the cars in his way, only the mothership calling him home – be it Toys R Us full of vetch toys or Currys full of remotes.

Hold him by the hand (wrist if necessary)

Harry is rapidly enjoying his independence which is fantastic and likes to walk at your side which is usually fine in safe areas like fields etc. But his lack of danger awareness coupled with one eye and ear means that he really struggles to know where sound or objects are coming from. This can make him a danger to himself and others at times. I hold his hand at all times and sometimes his wrist as we get closer to a store and he starts to try to pull away from me. The last thing I want is him slipping from my grasp and ending up injured (we’ve tried wrist bands and reins both of which upset him more). Thankfully I don’t have to do this very often anymore but I explained it anyway. Forewarned is forearmed.

Be clear on how many toys he can have

Emily was buying him a gift (the vetch turtle if fate was feeling kind) and she also had some birthday money from my brother for another present. I explained that she would need to make it clear in the car that he could only have two presents. He had a habit of collecting six and then screaming the store down because I made him put five of them back. However, I have found that when he goes into the store knowing he can have a certain number he is happy to make a selection which has made life much easier for everyone. I did also warn them that he might try to slip small toys into her bag or stuff them into pockets. I just want to make it clear at this point that this is not learnt behaviour and Toys R Us do not need to be upping security on days we visit!

Allow him to run into the store

Now this is a biggy. Harry knows the layout of the store as well as he knows his house. When he gets into the store he runs faster than the love child of road runner and Usain Bolt, weaving around crowd and buggies like the nimblest dog at crufts as he goes. My mum panics at this but I never worry. I know where he will be and I am hot on his heels but I don’t ever make him walk with me as I know it would blow the lid off the pressure cooker of excitement. Plus, if you just listen you will hear exclamations of “VTECH WOW!” and “YEAY!” which will calm your nerves and warm your heart in the most wonderful way.

Five words which are an essential part of the shopping experience. Harry has found the toy, picked the toy up and now wants to take it back to the car. He always forgets that minor detail of paying for it (I promise that I’m not raising the artful dodger!) and waiting in a queue is a huge inconvenience to a boy who simply wants to play with the toy he has chosen. Apologies to male cashiers but I have found that by saying “Lets pay the lady now”, Harry factors the wait into his shopping trip and is less likely to get distressed. Don’t get me wrong, extra-long queues can strike fear into my heart but generally he’s fine once he knows it’s something we need to do.

So, off they went for the shopping trip and Oliver and I grabbed the opportunity to go swimming at the gym. An hour later and they were home, one very happy boy with one enormous Vtech Turtle and a Vtech snail. Emily said, as I had expected, that he was particularly keen to get across the car park to the store and exceptionally fast once he was in there but he’d been delightful and had only taken a few seconds to choose his two gifts. 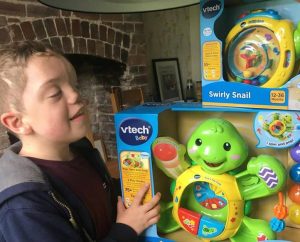 I thanked her and silently thanked the universe for the fact that the turtle had been in stock. 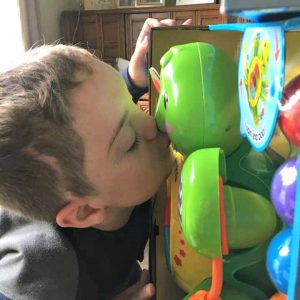 That was, until, I realised that the turtle was a ball popper. Andrew has always said that Harry knows exactly what he wants. Turns out, he wants his mother to have a nervous breakdown. Thanks for that son. I’ll be in the corner drinking gin. You can pick up your own balls!