4 reasons for the rise of Mrs Hinch 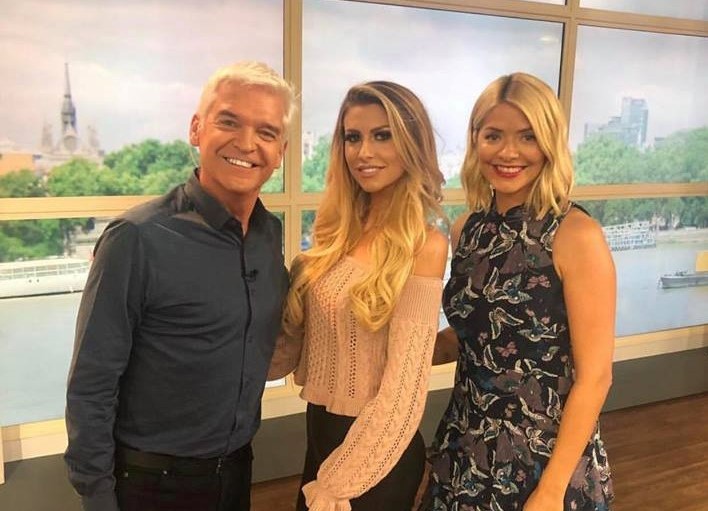 My friends and family will tell you that while I am a fairly organised person, my home (and workplace) has always been organised chaos. I always knew where everything was but to the untrained eye, it looked as though I was a clutter hoarder. Every now and then I would have a ‘blitz’ (aka a mammoth tidy up session) but within a few days, piles of paperwork were appearing and I was losing my worktop under the bits of homeless ‘stuff’ that were squatting there. Then I found Mrs Hinch. 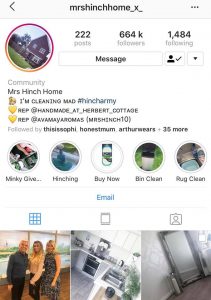 If you’re not aware of who Mrs Hinch is, she is currently taking Instagram by storm and world domination is looking likely anytime soon.  Sophie Hinchcliffe set her own Instagram account up to share images of her home. From there she started sharing ‘stories’, which are 15 second long videos collated together at the top of your own page, of her cleaning the house. She amassed a respectable 10,000 or so followers and then something happened.  The social media community claimed her as one of their own and through online recommendations (shares) and the use of an online personalised identity that people could join (hashtags) a community grew around the cleaning passion of a hairdresser from Essex. The #HinchArmy was born and as her follower numbers reached 40,000 I discovered her through a blogging group which was saying how fab she was.

I have never looked back and my home has never looked so good. Even my ex-husband has commented on the transformation! She’s my new addiction and I’m not the only one. The low-cost products that she recommends are flying off shelves across the country and the cloths and ‘tools’ she uses are selling out faster than they can be made. Not only does a huge proportion of the country now love Mrs Hinch but closer to home, she’s making a huge difference in my own home and self. 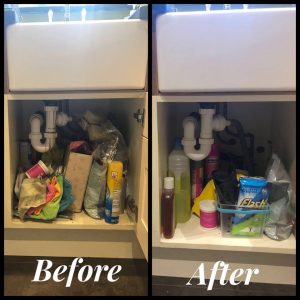 Under my kitchen sink

I am LOVING cleaning! (Who the hell am I?) I am incredibly proud of my home for the first time in 14 years of being a homeowner. My home is tidy and my usually frenetic mind feels calmer, more at ease. Many people with anxiety have been in touch with her to say that she has given them the advice and motivation to start cleaning up and they have found a mystical peace in Zoflora and Lenor! Even my family have caught the bug with initially sceptical Andrew now zofloraing his sinks at home and squirting fabric softener on his soft furnishings (don’t tell the lads at work!) And last week, when Oliver was really upset about school and too exhausted to do much at all, he said to me “shall I come and help you hinch the bathroom?” and we spent the next 3 hours cleaning, singing to my playlist and laughing. It’s not even called cleaning anymore. It’s simply ‘hinching’ 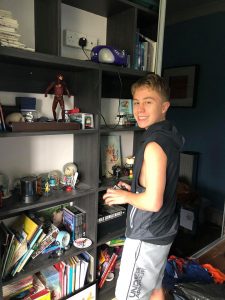 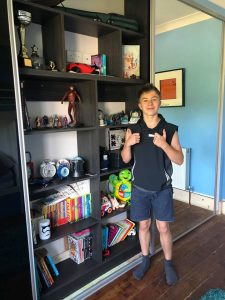 The transformation has been incredible both in the house and in us all. The rise of Mrs Hinch absolutely fascinates me and I’ve been thinking about the reasons that she has been propelled to social media (and morning TV) fame!

Unlike some of the celebrities who are created after appearances on reality shows, Mrs Hinch is not a manufactured figure. Instead, her popularity has grown organically from followers who love how real and relatable she is with her natural dry sense of humour and quirky take on cleaning. There has been no drama in the diary room or evictions to grip her audience. Instead, we are watching her genuine shock as her popularity continuingly increases and that is really endearing to watch and makes us more determined to recommend her and help her reach new audiences.

The cleaning products and items she uses regularly have all been given names (Minkey, Dave, Pete, Neil, Stewart, Vera etc) which means that they all feel like part of the family as well as Mrs Hinch herself! The products she uses are cheap and easily accessible (when they are in stock) and anyone can do what she does so she is appealing to the masses. Total strangers are connecting with each other in cleaning aisles across the country as they buy the same products. It’s a bit like knowing someone was in Fight Club except the first rule of the Hinch Army is to greet your fellow members. Followers are using hashtags such as #MrsHinchMadeMeDoit and creating their own accounts in tribute to her antics (although beware of accounts selling fake merchandise). People are talking about it at home, at work and on the tube! The community has currently taken a life of its own and is crazy (in a great way) to watch. 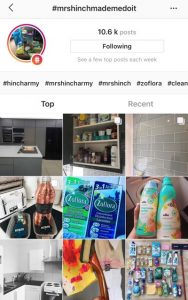 One of the hashtags that people are using

I have already mentioned that her account has made a huge difference to so many people. Sophie regularly shares messages from people who were struggling with anxiety, depression, lack of confidence etc who have followed her tips and discovered a new-found passion and outlet for their issues. She is acknowledging and sharing the success stories of others on her own account – which is the exciting equivalent of having your text message read out on the radio! And she is encouraging ONLY positivity amongst her followers and fostering a sense of belonging to a common cause.

For me personally, the difference is in my mindset as much as my home. I am putting things away where I may have left them before and taking 5 minutes out of each night before bed to ‘hinch’ the kitchen and lounge so that we are coming down to a fresh and tidy home. A new habit has replaced my former lethargy and I have never been more confident that this change will last! 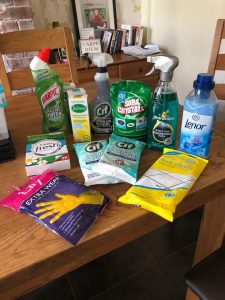 I will say at this point that some people have commented on the fact that Mrs Hinch uses ‘too many’ products and that she may be triggering or contributing to people’s OCD. To those comments, I would say that followers can choose to buy as few or as many products as they want to and if watching her causes any issues then simply don’t follow her. People are entitled to their opinion of course but it makes me sad that people would criticise someone who on balance is making a much more positive difference than otherwise.

Other than the factors above its hard to say why Mrs Hinch, over other people who may be doing the same thing on their social media channels, has literally become an overnight sensation. I think luck and timing do play some part but I don’t want that to sound like I am taking anything away from the fact that she is just brilliant! She’s definitely got what Louis Walsh would say is the ‘likeability factor’.

By her own admission, she has no idea where this media interest has come from her popularity shows no signs of slowing down. She currently has over 660,000 followers genuinely rooting for the success of a hairdresser from Essex who has captured the hearts, and sinks of a nation! 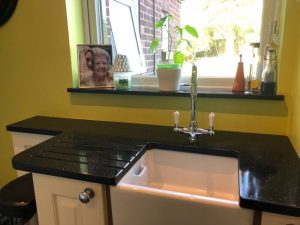 Click here to take the quiz and see if you are a hinchaholic !