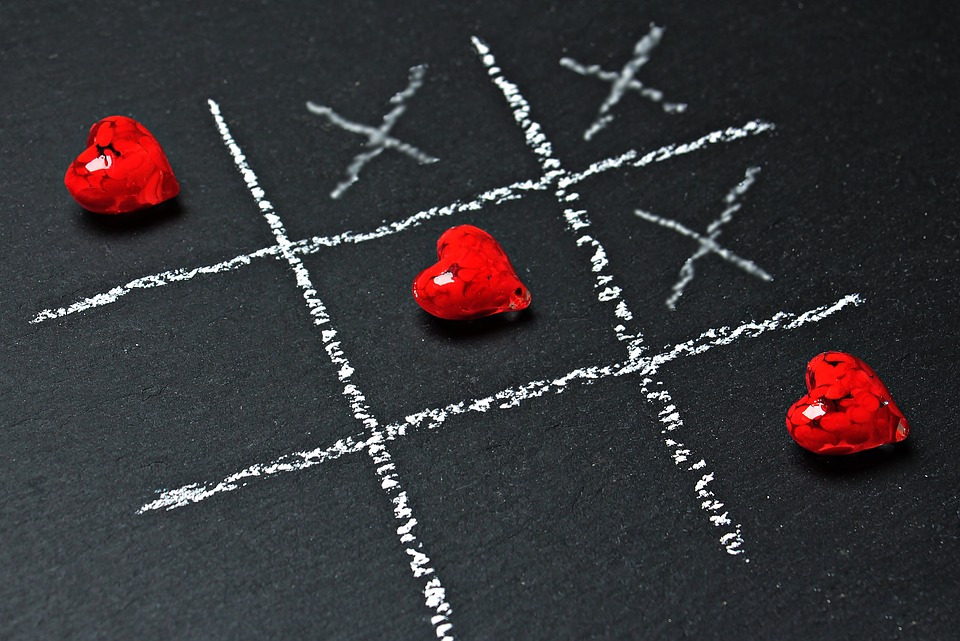 It seems that I always get inspiration to write a blog while I’m testing my bladder control at the local trampoline centre (with the boys, I don’t go alone!) The last time I was there I wrote one of my most read blogs to date – To the mother of the life I will never know and this week as we returned to bounce off some half term energy I was struck by another aspect of my life that I thought I would share.

We visited with my very dearest friend, another good friend and their children. It had been quite a while since I had seen them and there was news to catch up on so I asked Oliver and his best friend Finn if they would bounce with Harry a little more than usual to give me some time. They both agreed (in exchange for a sleep over the night before) and so I was looking forward to the visit.

However, when we got there I soon realised that I wasn’t going to find my first experience of ‘chilling and chatting’ as relaxing and rewarding as I had expected. In fact, I realised three important things for the first time.

I hate the peace I crave

When we arrived, the only seating was upstairs and I didn’t have a clear view of the trampoline area. My heart was banging and my insides were literally like jelly as I assured the others that I could stand by the window and chat across the room (ludicrous!). A woman sitting by the window offered us her seat and so we moved all of our many coats and shoes across to the table by the window where I had a slightly better view. But it still wasn’t enough. Harry had disappeared. Not from the venue but I couldn’t see him. I caught my breath in my throat. Where was he? What had I dressed him in? Where was Oliver and Finn? As the others sat and began to catch up I compared my apparent neurotic behaviour to how it would feel to have left a toddler with an older sibling. They agreed that they’d feel uncomfortable too and not for the first time I saw them reminded that my life would never be one of sitting and chilling while the children entertained themselves like they could. And I realised that I didn’t want that. The peace that I had imagined to feel so liberating and wonderful, simply terrified me. I NEEDED to know where Harry was and so I decided to go down as soon as I had ordered my drink.

I want my son to care but not be a carer

I had only just ordered a tea when Oliver appeared. The boys had been bouncing with Harry for about 10 minutes and they’d had enough. Oliver asked if I would come down and take over. I said I would and despite planning on going down anyway, my heart sank a little bit. I had asked Oliver for just twenty minutes. Just a little window of time for me to enjoy the company of friends I rarely get chance to see but I had only just been handed my berry tea and my respite was over. I have spoken before about how incredible Oliver is and often call him the unsung hero of our story. I had felt sad that I was losing my time with Caroline and Jess but equally I realised that I couldn’t be doing that at the expense of Oliver’s fun. I shouldn’t expect him to sacrifice any of his time and memories just to give me a break. I was asking him to care for Harry but I am aware that I don’t want Oliver to feel like he has no choice. I can’t have it both ways. My son may naturally feel like his twins’ carer at times but its not right of me to impose that upon him. 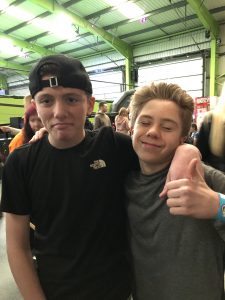 This is as close to a smile as I could get out of the teenagers!

I envy the parent I would never choose to be anyway

For a long time, I have been torn between looking forward to my half term catch ups with friends and dreading it. When all of our children were little it was so easy to sit together and be on ‘toddler watch’. But now, their children, like Oliver, are happy to go off and explore wherever we might be without needing constant supervision. And it has made jealous, sad, resentful. I have felt it all. My mum used to say “You don’t HAVE to do it all on your own” but some days its easier to do things on your own and not be reminded that you’ve been left behind in the parenting stakes – stuck in the parallel universe of toddler watch. “Shall we go…” from a friend translates to “Shall we catch up with each other and you join in if and when you can” in my head and some days I could stamp my feet and have a tantrum at the unfairness of it all. But then I am with my boy and I am reminded that being with him, keeping him safe, and watching him love the life he adores is absolutely priceless.  I think if someone could take that away so that I could eat cake and drink tea in peace, I’m not sure I would take it. A life like there’s would mean not having a boy like mine and that’s not a world I ever want to know.

So, Harry and I bounced and danced on the trampolines while Oliver laughed with Finn and got frustrated that he couldn’t quite master a back flip. One of the staff came over to chat with us and said she had been watching Harry and loved seeing how much fun he was having. My boy does that, he draws people in with the pure happiness that he radiates. A virtual lasso of love and admiration. No one is immune to his super power and as we chatted with the staff member, dressed as super girl for the super hero theme of the week I looked at my boy and thought that not all heroes wear capes.

And when he saw I was getting tired, sat down on the trampoline with me for a minute, put his forehead on mine and smiled a smile that said “thank you Mummy, I love you” I could have actually cried. 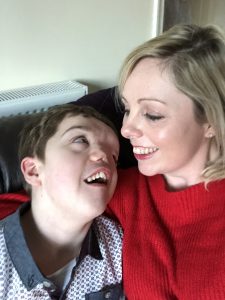